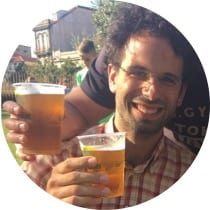 Porto is a city with a long and vibrant history. A lot has been written about it throughout the years, but never as much as now.

With the recent surge in tourism, the Invicta has inspired a myriad of books, essays and articles. Be it the millennium-old cathedral or the latest molecular gastro-pub, interesting facts about Porto can be found everywhere.

Today I want to talk about lesser known stories, the most interesting facts about Porto. If you already know our insane “sandwich”, that Port wine and codfish definitely do not go along, that those are NOT Harry Potter fans and that – for the last time – Eiffel had absolutely nothing to do with the building of the Luiz I bridge… this article is for you.

Let’s dig a little deeper, straight into my list of the top 5 unknown interesting facts about Porto!

These are the most interesting facts about Porto: 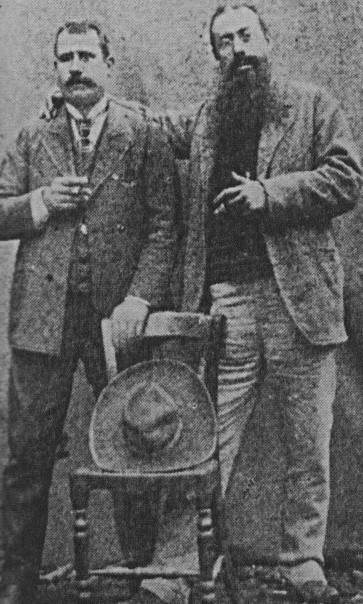 Born José Teixeira da Silva in the town of Penafiel in 1818, this prestiged military became known to us as “Zé do Telhado” (“Zé”, short for José, “of the roof”, in a literal translation).

Having lived a largely rural life, he joins the army’s Cavalry and takes a party in the turbulent times of 1837. This leads him to exile in Spain, but he does return in 1846 as the Sargent of a counterrevolution, for which he is made Knight of the “Torre e Espada, do Valor, Lealdade e Mérito” Military Order.

But, sadly, not even the most prestigious award in Portugal (still to this day) pays the bills. José falls into a swirl of debts and struggles, eventually becoming the famous bandit “Zé do Telhado”. 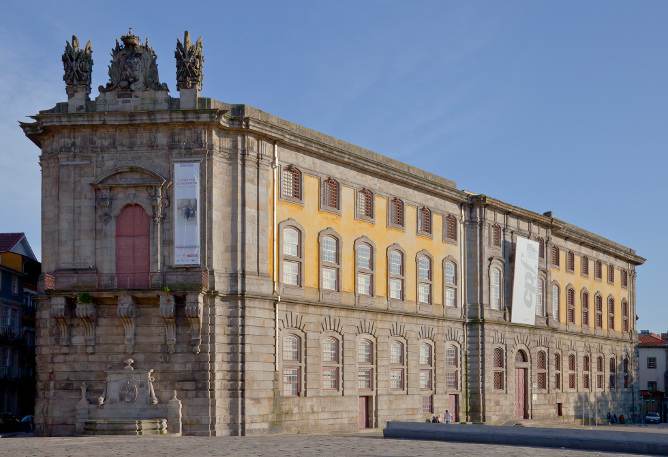 © Livraria Lello. The prison where Zé do Telhado was held is now the Portuguese Center of Photography.

Throughout Northern Portugal, Zé and his posse raid the most opulent palaces and residences to steal their values. Along with his fame as a robber, Zé became renowned as being extremely polite whenever he would run into his victims.

Ultimately, when he was caught by the authorities in 1859, and during the subsequent trial, Zé’s most notable action came to light: he had always shared his “loot” with the impoverished population of his native Penafiel.

He was arrested at “Relação” prison in Porto’s city center, current Portuguese Center of Photography, and from there he was sentenced to spend the rest of his life in exile, in Angola, where he led a happy life, away from revolutions and roofs. We bet you didn’t know about this interesting fact about Porto! 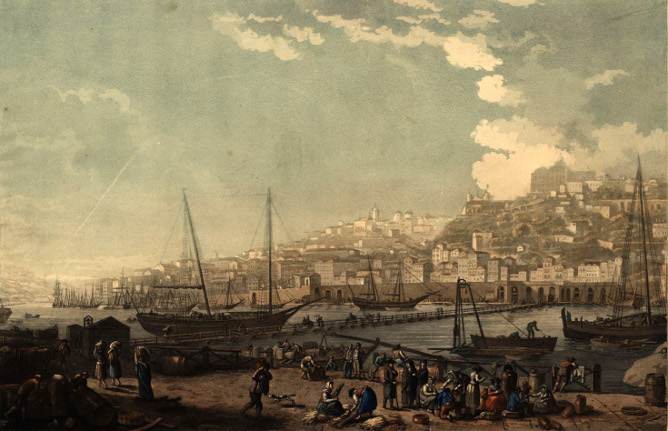 © Biblioteca Nacional de Portugal. A painting of the old boats bridge in Porto by Henry L’Évêque (1817).

What can the buildings of Porto tell us about its fishing or trading traditions and the suspicion of its citizens regarding nobility or the higher-class lords? Don’t tell me, I think I know this one…

Granite! Everywhere, granite! We most definitely do not have the characteristic “Lisbon city light” (nor do we aim to), because people have always chosen to leave the stone bare and raw, much like its citizens.

The soil of Porto is mostly granite, which is widely used in construction across the city. Agriculture, though, doesn’t exactly thrive on austere and rocky soils. So, early on, the people of Porto became austere themselves, and led them to make a very modest living off of the other available resources: the rivers and the ocean.

The “Portuenses” became tradesmen and fishermen. The men who spent several consecutive months at high sea fishing, or trading in the ports of Flandres or Bristol, left behind their families in order to provide for them. 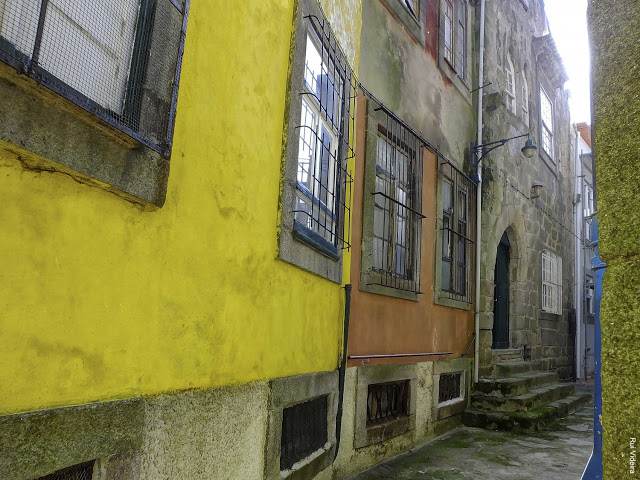 © Ncultura.pt. A picture showing one of the oldest houses in Porto (right) built in the 14th century.

That is, until a nobleman comes along. Remember, back then (we’re talking 12th to 16th century) if you were a noble, you could demand hospitality at the house of any citizen of the kingdom. This included extending their welcome for as long as they saw fit, while helping themselves to all their food and rations and, in many cases, to their wives and daughters.

When, after months at sea working hard, people came back to an all-of-a-sudden pregnant wife, they demanded a stop to it. So they petitioned the king D. João I, that on 20th February 1390 determined no nobleman “could rest inside the walls of the city nor buy houses or estates within it”.

And who thinks they weren’t serious, take the example of the late 15th century Rui Pereira, count of Feira. When he decided to move to a house he owned in Ribeira, people started sending him messages through his servants that he was overstaying his welcome. He ignored them, until the fatal day that a mob broke into his house, leading to his escape and the burning of said house.

In conclusion, never question the hard-earned privileges of the people of Porto.

3. Porto has neither a port nor… Port 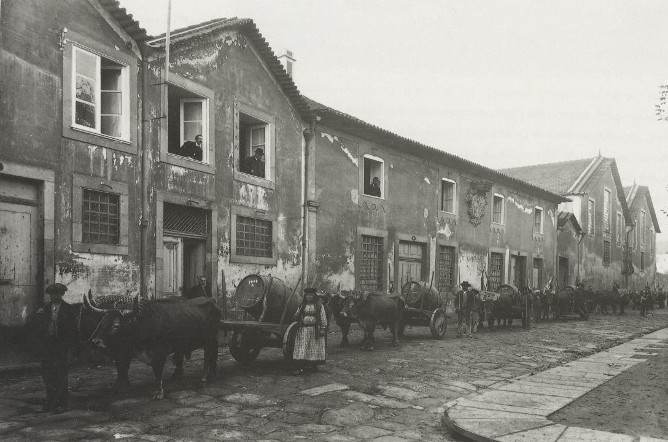 As our readers might deduce, “Porto” is Portuguese for port. It is the same name for the city, a harbor for ships and trade, as well as the famous wine.

However, an interesting fact about Porto that you might be unaware of is that none of those things are actually located in the city.

The Metropolitan Area of Porto, though, spans 1024 km² (395 mi²) and is home to over 1.5 million souls. This includes several municipalities, of which Gaia (immediately across the river Douro from Porto) and Matosinhos (originally a fishermen village, North of Porto) are the main examples.

It’s precisely in these bordering municipalities that the two things most associated with Porto are actually located: the Port wine cellars in Gaia and the “Leixões” harbor in Matosinhos, named after the rock formations found in its place before building the port, 2nd biggest port and responsible for 25% of the international commerce in the country.

This will be our very own little secret. Please don’t tell it to anybody!

4. Porto, the city of… skylights 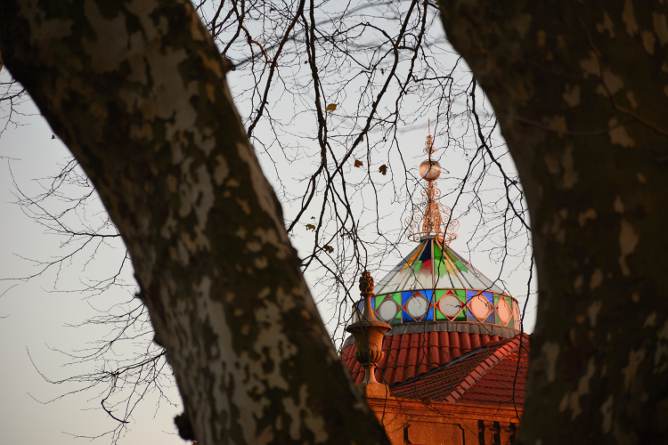 Porto, the city of bridges, famous for its Port, sights and food… has something quite particular. Its extensive collection of different and extravagant skylights!

Look up, or rather, go to a viewpoint and look down. The medieval city of Porto is a labyrinth of narrow, albeit long. Having proper light indoors relied on the construction of a skylight.

Along with a more recent desire on behalf of a wealthy merchant elite to distance themselves from the rest of the bourgeoisie, what was once a lighting necessity became a factor of social distinction due to their opulence.

And if our skylights don’t bring all the boys to the yard, then our terraces will! These narrow but long buildings created awkwardly shaped and wide city blocks, that often create terraces and back-gardens that are absolutely charming. Come discover some of them with us!

5. Never promise your heart to Porto

Because we might just take literally… as we did in 1834.

As you might know by now, Porto was the stage of a brutal year-long siege during the civil war that opposed two brothers of the royal family between 1832 and 1833: D. Pedro IV (I in Brazil) and D. Miguel.

Pedro, on the side of those who defended a constitutional monarchy, enters the city of Porto in 1832 with some 7.500 men, in order to fight Miguel’s troops, that argued that their king Miguel should be an absolute ruler with no division of power.

The people of Porto fought bravely alongside Pedro – who became known around here as the Soldier King. So brave in fact that the city still keeps its title given by Pedro’s daughter, the Invicta city (i.e. unvanquished, unbeaten, unconquered). 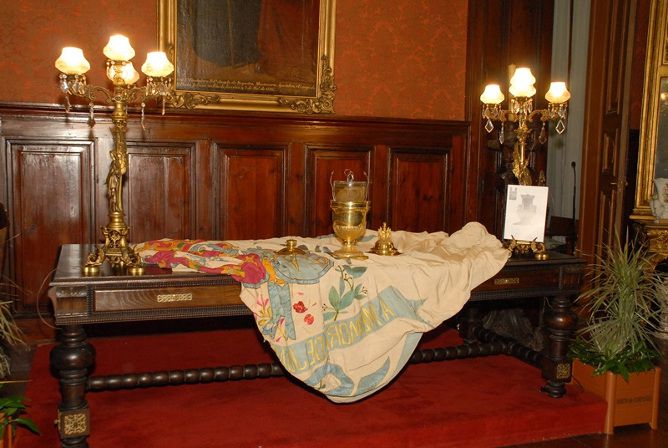 © Porto.pt. The heart of Dom Pedro is kept in Lapa Church.

But that wasn’t all. Pedro, laying in his deathbed less than a year after his victory, held his wife’s hand and solemnly begged her that Porto be “the tomb of his heart”.

Six months later, and after an intense debate over where would it be deposited, Pedro’s heart was put to rest at Lapa church, where the Soldier King used to attend mass everyday. According to a chronicler that attended the ceremony at the time, it featured “no royal splendor nor luxury, but rather an abundance of tears and nothing short of pure sentiment”.

And sentiment is what we carry in our hearts over this episode in our history, so much so that overlapping the city’s coat of arms, front and center, is… the heart of Pedro!

I hope you have enjoyed this list of interesting facts about Porto, and that it shall fulfill your heart with high expectations regarding your next visit to the city! 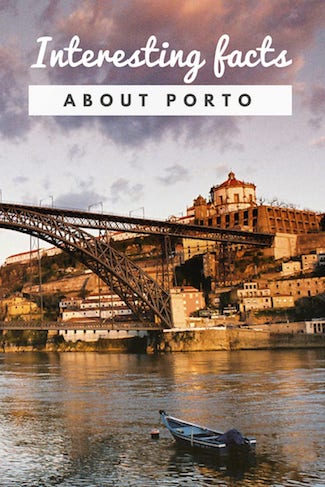 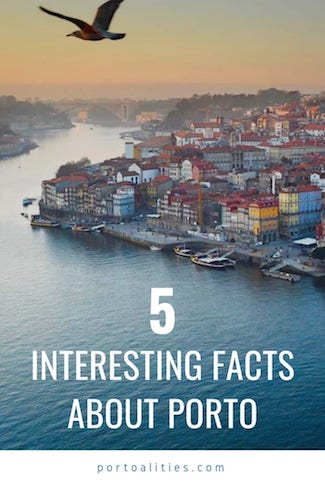