The most beautiful buildings in Porto

In Portoalities, we are eager to share stories about unusual monuments and buildings in Porto. We find that people benefit more from their trip if they go beyond what the touristic handouts say.

In Porto, there are many beautiful buildings to discover beyond the Clérigos tower and Casa da Música.

Did you know that Business Insider said Porto has the most beautiful McDonald’s in the world?

Well, they’re not wrong. Even a McDonald’s branch is much more interesting when you know its story.

In this article, we picked a few of the most beautiful buildings in Porto. If their beauty doesn’t capture your attention, then read about their history and how they contributed to shaping the city as we know it today. We promise you it is worth it to get to the end of the article ☺

Here are the most beautiful buildings in Porto: 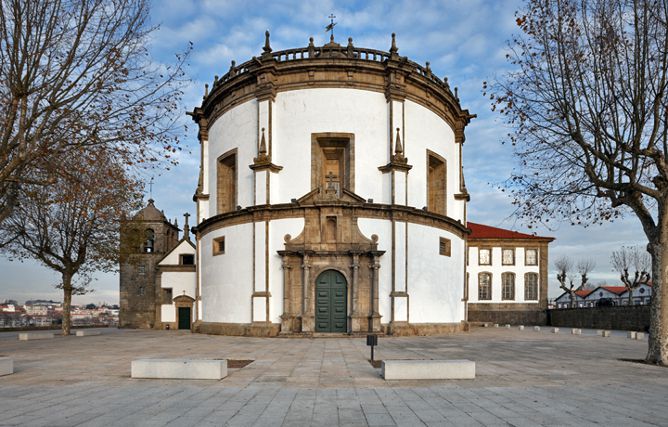 There are many religious buildings in the city, making it hard to resist the urge to write about them all. However, Serra do Pilar Monastery is one of the most beautiful buildings in Porto as it has a great view over the city and a rare circular shape.

The monastery of the Order of Saint Augustine took many years to be constructed due to financial hardships. Portugal fell under Spanish rule, delaying the project even further, until 1672.

During the Siege of Porto (1832-1833), the liberal army used the monastery as a military base. From there, they supplied support to their troops on the other side of the Douro river. This war period left the monastery in ruins. But a group called Amigos do Mosteiro da Serra do Pilar helped restore the monastery to the gem we see today.

Visit what some call the “Window to Europe” and see an example of post-renaissance in the region.

How to get there: Jardim do Morro subway station is a 4min walking distance. 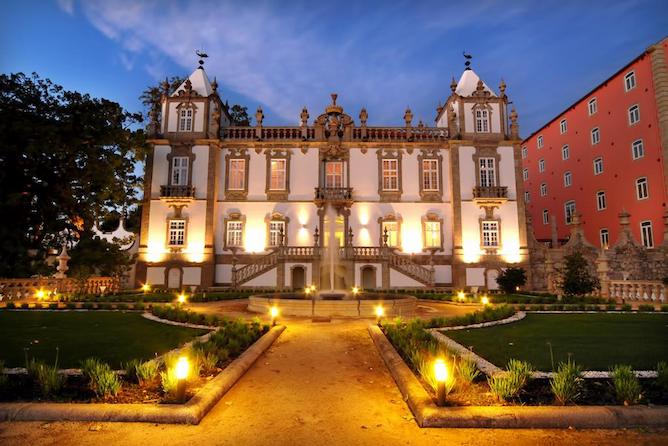 Contrary to the capital Lisbon, Porto, the city of merchants, never had many lavish palaces. But there is one that people see as one of the most beautiful buildings in Porto, Pestana Palácio do Freixo.

Located in a breathtaking spot in front of the river, the palace houses one of the best luxury hotels in Porto. On the same property, there’s an old cereal factory called Fábrica Harmonia which is now part of the hotel.

Even if you are not staying at the hotel, you can stop by for an afternoon tea or for a glass of Port – it’s expensive but totally worth it.

How to get there: Unfortunately Palácio do Freixo is rather far away from the city center, so to get there you should take a Taxi / Uber. 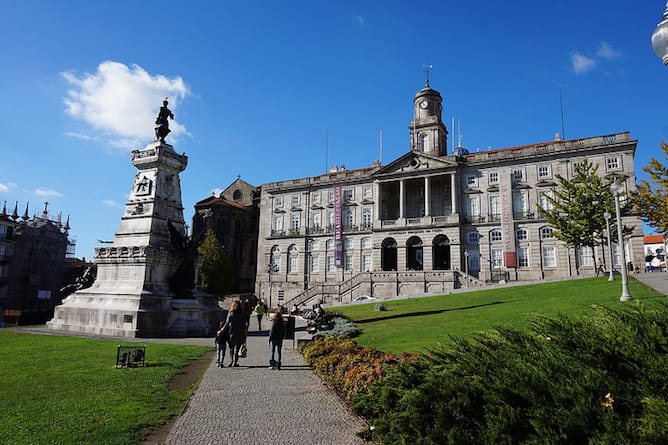 This 19th century palace is the property of Porto’s Commercial Association. It used to be the stock exchange palace when Porto had great financial success due to the Port wine trade industry.

The Palácio da Bolsa is one of the most beautiful buildings in Porto. It has remarkable features and must-visit rooms like the Golden Room and the famous Arabian Room. Nowadays, the palace is used for conferences and exhibitions.

Even though Palácio da Bolsa is one of the most beautiful buildings in Porto, we do not particularly enjoy the guided tours inside the building as they are not very informative and you are not allowed to ask many questions. Nonetheless, here are the prices to enter the building:

How to get there: São Bento subway station is a 10min walking distance. 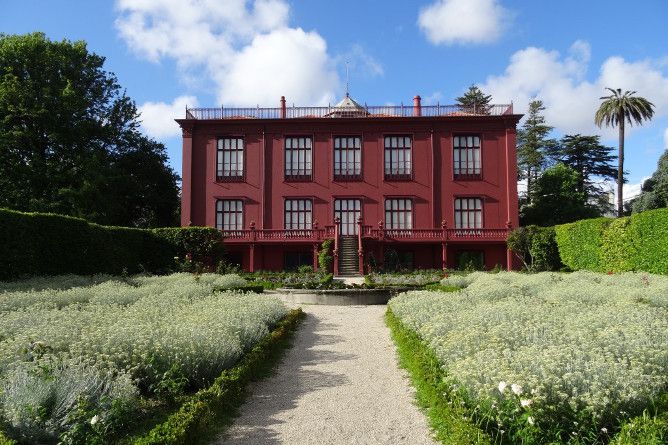 The property has had many interesting owners. First, it was owned by a French hat maker named Jean Pierre Salabert, who purchased it from the Order of Christ (1802). After the French invasions, the Portuguese crown confiscated the property.

In 1895, João Henrique Andresen Júnior bought the property. Andresen Júnior was the son of a Port wine trader and the grandfather of the famous Portuguese poet Sophia de Mello Breyner Andresen.

Sophia, whose poems are taught in school, referenced some of the house features in her work.

Entry Fee to the Biodiversity Gallery (2018)

How to get there: from Casa da Música subway station, take bus 504 or 204 until Casa das Artes. 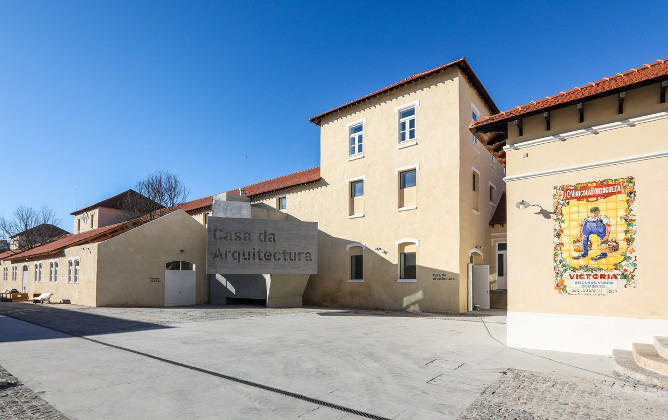 In Matosinhos, you’ll find the House of Architecture. Some might not consider one of the most beautiful buildings in Porto because, from a distance, it looks like a normal house complex. However, the history and the rehabilitation efforts of this building are remarkable.

The original building, which was a property of a wine company, is the first industrial building in Matosinhos (1897-1901). After the company went bankrupt in 1930, the property was abandoned. During the 50s, it became a shelter for those in the riverside who were displaced when the Porto – Leixões docks were built.

In 1975, it became an accommodation for people who returned from the ex-colonies in Africa. And in 2013, the property was classified as a building of public interest.

Now it serves as the Portuguese Center of Architecture with some of the old ruins integrated. The center has exhibitions, events and even conferences.

Local Tip: If you go on Sunday between 10am and 1pm, the entry is free.

How to get there: Matosinhos Sul subway station is a 4min walking distance. 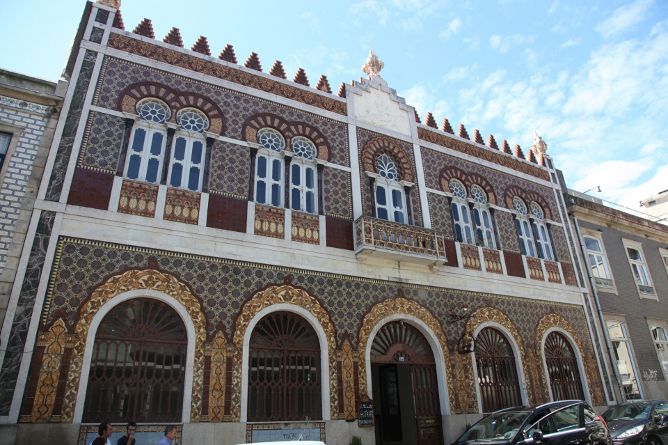 Walking in Rua de José Falcão, you can’t help but notice a building with a stunning neo-Islamic style façade, a reminder of a time when Porto was one of the greatest tile producers in the region.

This was a warehouse used for the storage and the display of Companhia de Cerâmica das Devesas’ tiles. It had one of the best ceramic collections in the Iberian Peninsula.

The building has a must-see exterior with door arches, geometric and golden details. It is unusual to see brown azulejo tiles in Porto, but that is one reason why this building is so captivating.

The lower part of the building is now a restaurant called Comme Ça (honestly it is not very good, don’t waste your time going there!).

How to get there: Aliados subway station is a 6min walking distance. 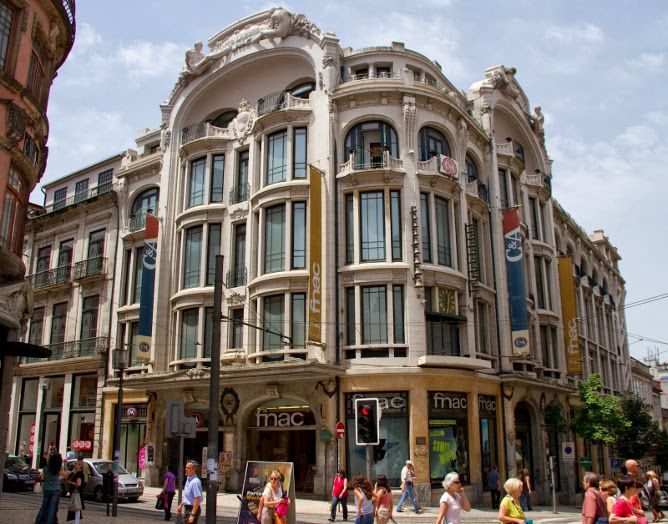 In Rua Santa Catarina, you can find one of the most beautiful buildings in Porto made by architect José Marques da Silva, the man behind the São Bento train station.

Grandes Armazéns Nascimento was a furniture/interior decoration store owned by the largest furniture company in the Iberian Peninsula. Inspired by the stunning department stores in Paris, Marques da Silva designed the building as a way to frame the product. Later on, the company’s factory was destroyed in a fire (1934) and the owners were forced to sell it.

Between 1940 and 1974, a luxurious coffee shop called Palladium was operating there. The owners made many changes to the original building, such as setting up a beautiful clock in the façade.

People can’t help but stop and gaze at the Palladium Galleries Clock when it rings. The clock displays important Porto figures like São João and Camilo Castelo Branco. You can also enter the building which now has a FNAC (technology and culture store) and a C&A (clothing store).

How to get there: Bolhão subway station is a 3min walking distance.

Faculty of Architecture, University of Porto (1985) 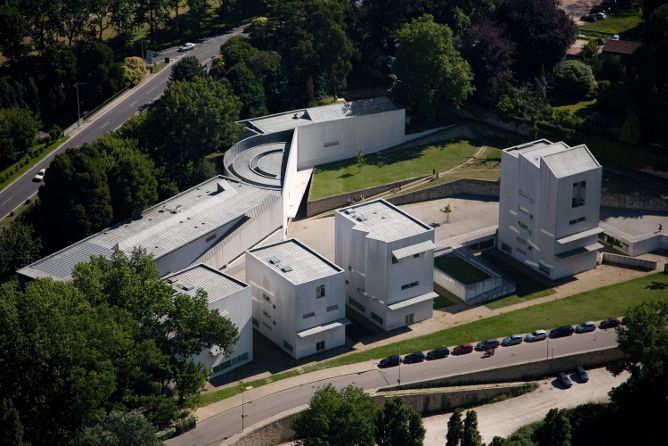 The architect behind this remarkable work is Pritzker winner Álvaro Siza Vieira.

The faculty has different volumes; four towers facing the river and a longer building. In the latter building, you have hallways inside which are designed in a way that each side takes you to a different place.

In this building, Siza Vieira used large marble tiles to pave the floor and cover part of the walls, giving the faculty a premium feel. The architect mixed concrete, wood and metal in a seamlessly way – something you can evidently see at the faculty’s library.

If you’re curious about seeing this building in-person, go to the southern part first where the library is. You’ll also find the bookstore, a great place to shop for architecture books related to Porto.

How to get there: take tram Line 1 until Bicalho. The faculty is an 8 min walking distance. 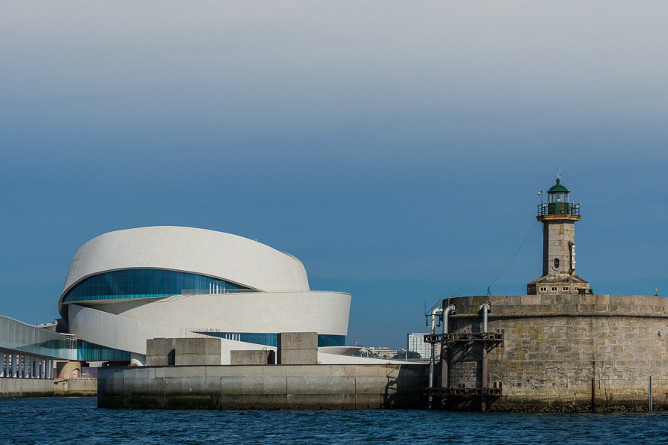 The cruise terminal for passenger ships is the work of architect Luís Pedro Silva. The building received international attention when it opened in 2015, being nominated for Building of the Year 2017 by Archdaily.

The snail-lookingbuilding is one of the best examples of contemporary works in Porto. Besides the cruise terminal, it has the Science and Technology Park of the Sea and a restaurant. There is a stunning 340 m quay which allows bigger ships to deck with access for pedestrians.

Don’t miss out on the opportunity to take a guided tour in this cruise terminal – you can buy your tickets at the terminal reception.

How to get there: Matosinhos Sul subway station is a 6min walking distance.

Finally, if you love history as much as we do, join us on a private tour to learn more about Porto. 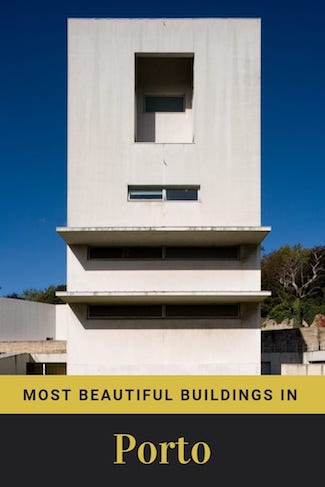 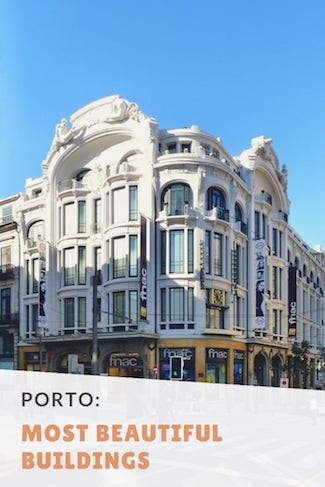