Best places for Fado in Porto

Even though  Portuguese people listen to Fado regularly (I am sorry to break the myths!), I totally understand that you want to watch a live fado show once in Porto. Therefore, I made a list of the best places for fado in Porto.

Before reading this article, read my article about the best neighborhoods to stay in Porto as it has great recommendations of hotels and apartments. Pay attention to the neighborhoods of Ribeira and Baixa / Sé, as practically all the places to listen to Fado are located there.

A little background information on Fado…

When we think of Fado, the image that instantly comes to mind is a shawl, a Portuguese guitar and facial expressions reflecting heartfelt emotions.

The word “fado” comes from the Latin word fatum, which means fate. Fado sings about love, pain, loss and injustice of the society. Fado can be summed up in a single Portuguese word, “saudade”, which translates into a feeling of longing, melancholy or nostalgia.

The result is a mournful melody that perfectly matches the personality of Portuguese people, very deep and romantic. 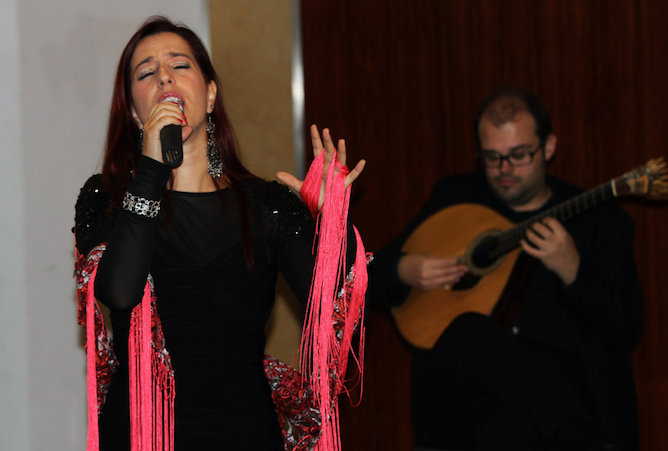 There are different theories about the origin of Fado. Some say that Fado evolved from the black slaves singing inside the boats that transported them from Africa to Brazil and that it was introduced in Portugal during the reign of D. João VI, when he returned from Brazil, in 1831.

Whatever its origins, Fado started to be noticed on the streets of Lisbon, particularly in the neighbourhoods of Alfama, Mouraria and Bairro Alto, in the early 19th century. It soon emerged in Coimbra and Porto.In Coimbra, Fado is related to the academic tradition. It is sung by students in the streets of the city. 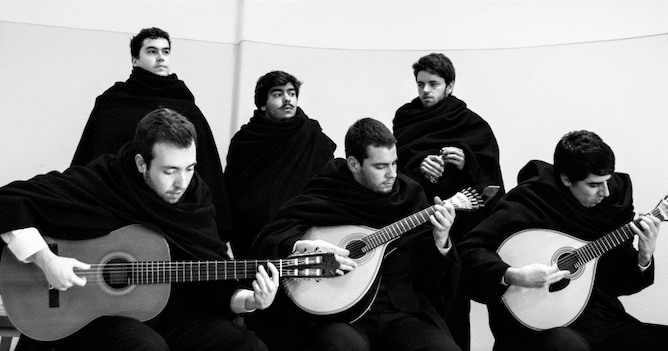 You certainly recognise some of these names. Amália Rodrigues, the most famous female Portuguese fado singer from the 20th century, was responsible for giving Fado to the world, and making it a Portuguese symbol when it was recognised by UNESCO as Heritage of Humanity. 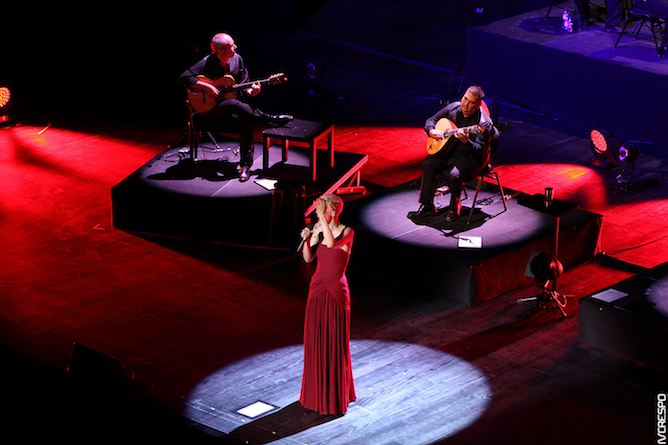 Some would say that the real tradition of Fado remains in Lisbon, but in the last three decades we could assist at a strengthening of Fado in Porto, with the opening of houses where you will find a perfect combination of traditional dishes with the favourite music of the Portuguese people.

Where can I listen to fado in Porto?

If you are staying in the city for a few days, you can’t miss the opportunity to attend a show of Fado in Porto.

I will first start with the most affordable options, as most people prefer them: 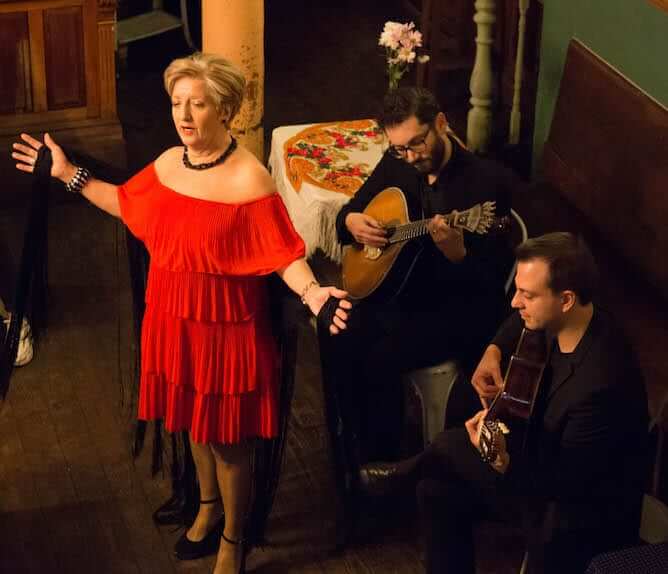 They may seem like the new kids around the block but in fact the Fado at Galerias de Paris, one of the coolest bars in Porto, has some of the most experienced and respected Fado musicians in the city, such as the a-ma-zing Portuguese guitar player Mário Henriques.

One thing that I particularly like about this Fado show in Porto is that they play real Fado and not marches, folklore and songs. Most Fado places in Porto mix all these different styles without informing its customers so they end up playing less Fado (and you, my dear tourist, are innocently unaware of this).

So when it comes to real Fado in Porto, this is as authentic as it gets! 🙂

Moreover, before the show starts the guests meet with the musicians; it is your chance to ask any question you might have regarding Fado.

You can get an online ticket to a Fado show at Galerias de Paris for only 15€, which includes a glass of Port wine or a bottle of water, in case you don’t like Port (what? We need to take care of that once you get here).

Just 2 minutes walking distance is the famous Clérigos tower, from where you can get the most spectacular view of Porto. Therefore, take my suggestion and get the online ticket to the Clérigos tower and after enjoying the view from there, head to this Fado show. It will be an unforgettable afternoon! 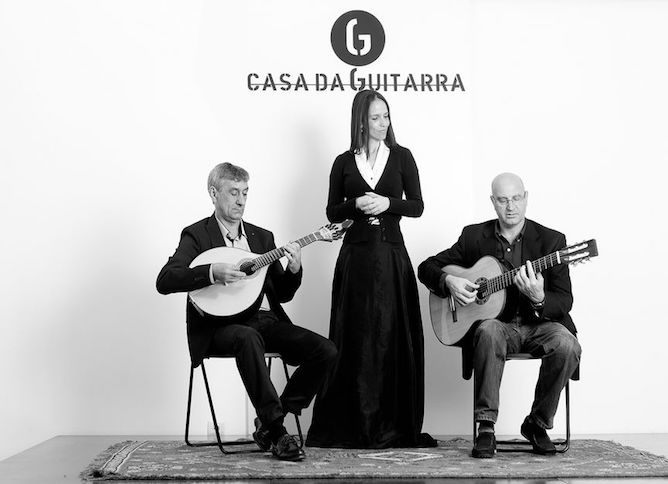 This is a good option for the budget conscious travellers as it is the cheapest way of listening to Fado in Porto. As it does not include dinner, you can get an online ticket to watch a Fado show at Casa da Guitarra for only 15€, which includes a glass of Port wine.

I recommend you to get the online ticket to Casa da Guitarra as it is a very popular show and it gets sold out very easily. You do not need to print it, just show it on your mobile phone at the entrance. 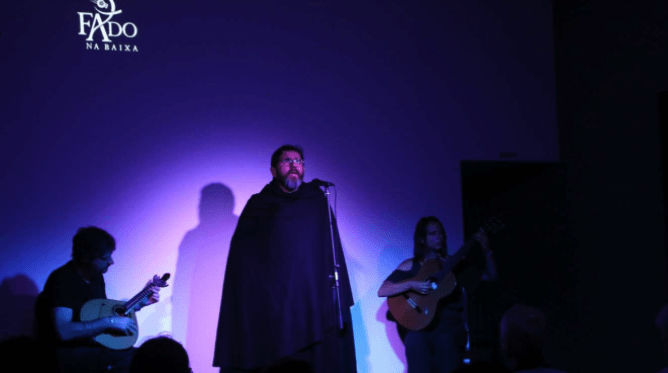 Fado in Baixa is different from the rest as it is divided into 5 moments (Traditional Fado, Portuguese Guitar, Coimbra Fado, Amália Rodrigues and Contemporary Fado). Each moment is preceded by a documentary about Fado and testimonies of famous musicians and singers.

Some people like the format because it is more informative, some consider it a bit touristy and get annoyed with the documentary interruptions to the music. It is up to you to decide if it suits your preferences or not!

The show lasts an hour and is preceded by a glass of Port wine, much like the other options in this article.

It is advisable to book the online ticket to Fado in Baixa, as it is one of the most popular fado options in Porto. 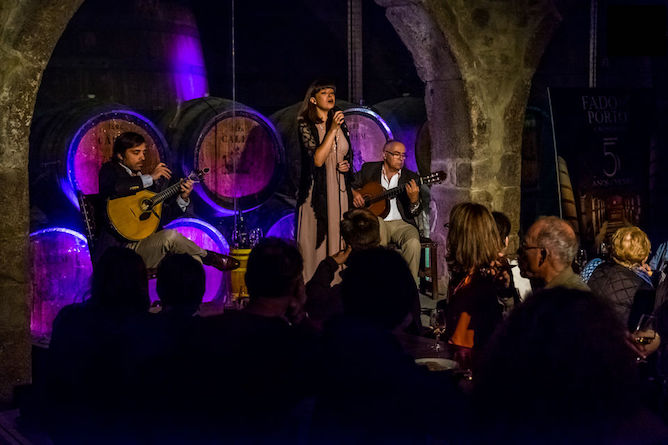 A really creative – and affordable – way to listen to Fado in Porto is to get a combo ticket that allows you not only to visit one of the best Port wine cellars in Porto but also to enjoy the tasting Part while listening to fado played in front of the wine barrels. How does that sound?! 🙂

This is a really good deal because a visit and wine tasting at a Port wine cellars costs around 15€ / 18€, and if you go to a traditional Fado show (in a restaurant) you will never pay less than 30€. Therefore, by getting a combo ticket you are saving a lot of money, as it only costs 21€.

Don’t forget to book this activity in advance as it sells out fast – no need to print the voucher.

Restaurants to watch Fado in Porto

As I wrote before, you can also watch Fado in restaurants. Some restaurants have a fixed price & menu, some let you choose à la carte. These are the best options: 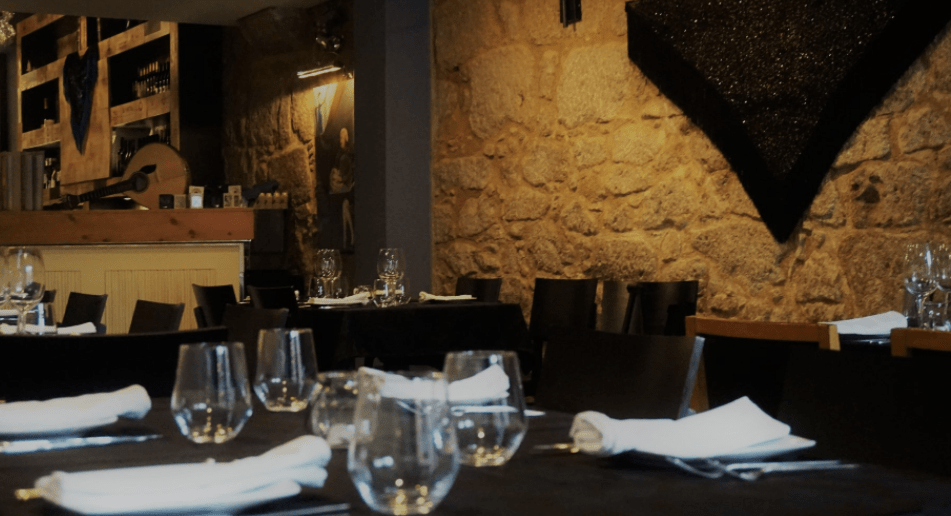 You can come in this cozy yet elegant place, located at the heart of downtown Porto, for a snack or a full meal. In addition to the main course (which is Fado :), the menu includes several options of Portuguese traditional gastronomy.

The menu also has several vegetarian dishes, so if you are in a group of friends with different diets, we would say that this is the best option.

If you decide on this place to hear Fado in Porto, it happens from Mondays to Saturdays starting at 20h30.

I recommend you to make a reservation beforehand. 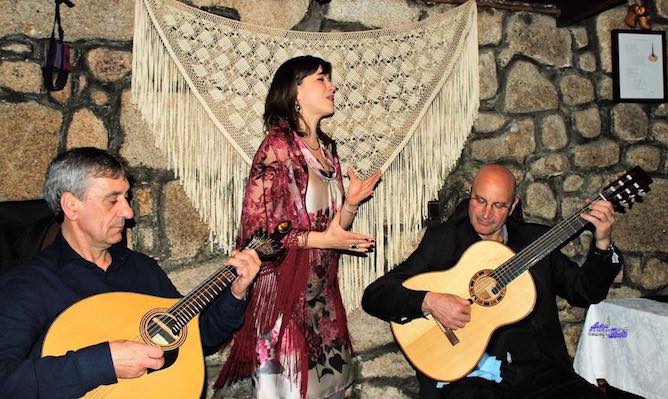 If you are looking for a way to experience Fado in Porto on a budget, this is not the place because bookings are subject to a minimum consumption à la carte of 37€ per person.

Nonetheless, it is really worth trying this restaurant! Upon entering you will feel like you are in someone’s living room due to its intimate atmosphere, which makes it a perfect place to feel the true “saudade” of Fado. For most of the locals, Casa da Mariquinhas is the number one place in town to watch fado!

The live fado nights are from Wednesday to Saturday, starting at 21h. The usual Fado singers are Ana Pinhal, Paulo Cangalhas and Miguel Xavier. The first two were born in the city 🙂

How to get there: the subway station São Bento is a 5 minutes walking distance. 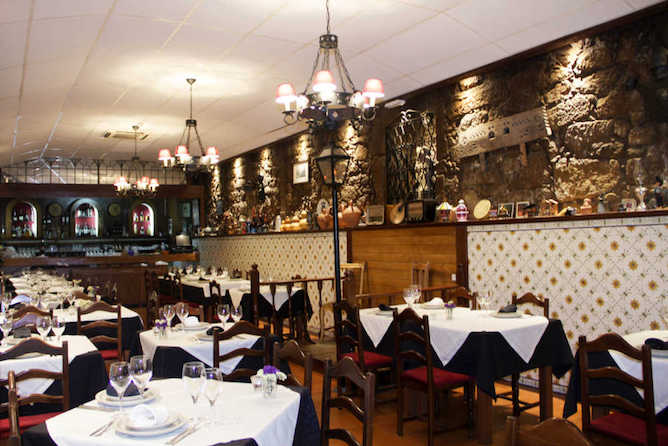 O Fado restaurant is a reference to hear Fado in Porto. No wonder. The interior in stone from this family run establishment offers an enjoyable and homely evening every time.

The price ranges between 25-30€, which I believe it is quite fair given the quality of the service.

Every day (except Sunday) you have the opportunity to appreciate the voices of António Laranjeira, Patrícia Costa, Paulo Carvalho e Samuel Cabral in keeping the tradition of Fado in Porto alive. 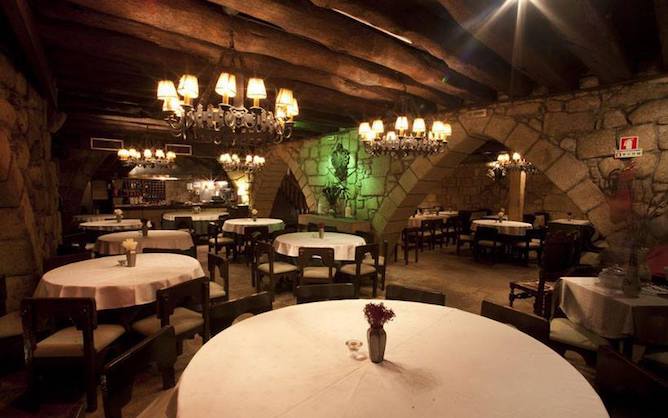 In this place you will find an amazing view over the river. Mal Cozinhado is located in the historical centre of Ribeira, by the riverside, and part of its building has more than 600 years of existence!

Some of the most renowned Portuguese artists have been here before, including the amazing Amália Rodrigues. Nowadays, we can delight ourselves with the mournful tunes of Valdemar Vigário, Rosinda Maria, Sandra Cristina e João Moutinho.

The menu doesn’t have many options but if you are craving for a traditional Portuguese dish, this is the place to try the well-known codfish dish: “Bacalhau à Brás” for 20€.

The show takes place from Monday to Saturday, starting at 8.30pm. 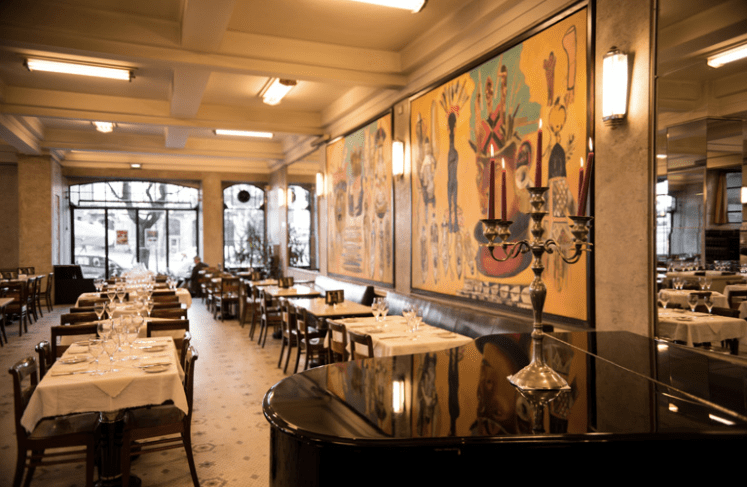 As we already wrote before, Café Guarany is one of the best coffee shops in town, where you can indulge in traditional “rabanadas” with egg custard. In my opinion, it’s the best excuse to pick this place to hear Fado in Porto!

The fado shows take place on Thursdays and Saturdays at 9.30pm. There’s no need to buy a ticket, our only advice to make the reservation for dinner.

How to get there: the subway station Aliados is literally in front of this cafe. 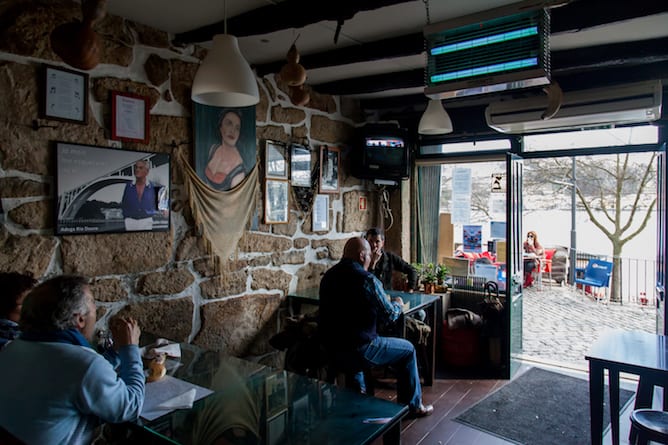 Upon arrival, the yellow canary will welcome you with the promise that in Adega da Piedade, the name for which this restaurant is better known, you will only breathe music.

The place has a breath-taking view over the Douro. Better is impossible! Actually, it is possible, but only if you are treated “Meu amor” or “Meu querido” (my love or my dear, respectively) by Dona Piedade, the owner of this tasca in Porto.

On Tuesday afternoons, you can find a bunch of people listening to Fado vadio while delighting themselves with the famous pataniscas de bacalhau (fried codfish cakes) from Dona Piedade.

It is, without a doubt, the best experience to get to know the soul of Porto, and for a very small budget. Each patanisca de bacalhau costs €1,50 and the other items of the menu are around 1-2€. Hard to believe, isn’t it? 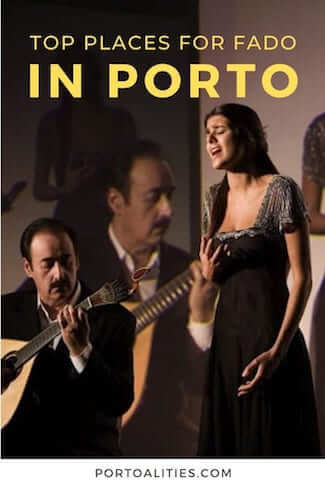 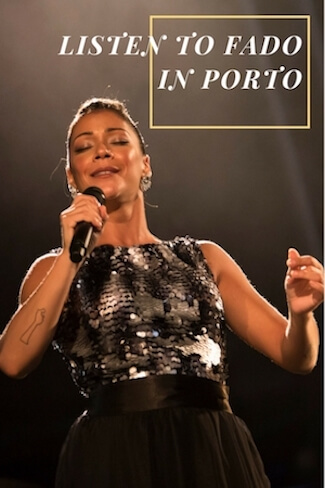