A guide to the train stations in Porto

One of the amazing things about Porto is its strategic location, making it close to many interesting places for travelers. By train, you can explore different areas in the Porto district like Espinho, with its lovely beach and fun casino.

You can also visit the amazing Douro Valley and its stunning villages where Port wine is produced. And if you’re up for more adventures, you can go to Lisbon, Braga or Guimarães.

Here is our guide to the train stations in Porto: 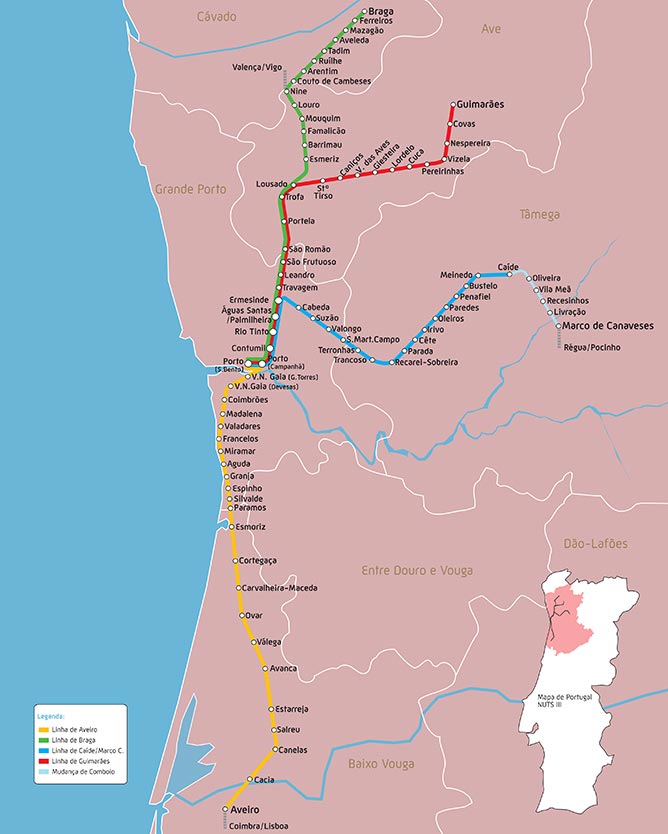 What are the main train stations in Porto and which one should I use?

There are three main stations in Porto; São Bento, Campanhã and Vila Nova de Gaia. But which one should you use? Let’s find out. 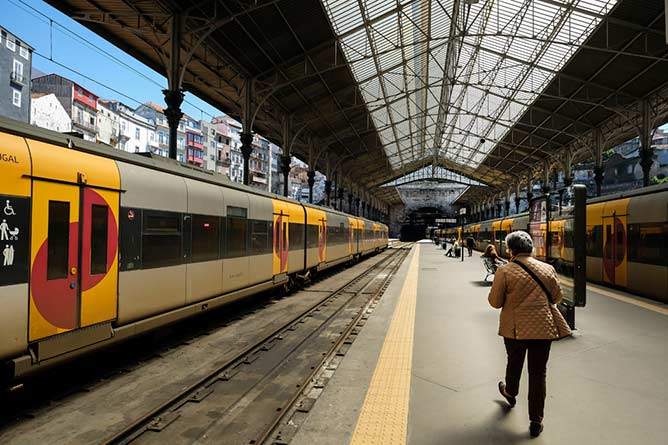 Opened in 1916, the São Bento train station is located at the center of Porto. It’s a remarkable building inside and out, which is definitely worth visiting whenever you’re in the city.

If you’re staying in downtown Porto or near the São Bento station, it makes sense to take a train from there if you’re going to nearby regions in Portugal like the Douro Valley and the cities of Guimarães and Braga. Therefore São Bento train station is suitable if you want to visit regions and cities within a two-hour range from Porto.

All lines depart from São Bento station except the North line which takes you to Lisbon and the Minho line that takes you to Spain. So if you want to go to the capital or to Spain, it is simply better to departure from Campanhã. If you are staying close to São Bento train station you can take any train from this station and get off at Porto-Campanhã and then from there change to the North line or the Minho line.

Trains available on this station are Regional, InterRegional, and Urban trains (we explain the difference below). 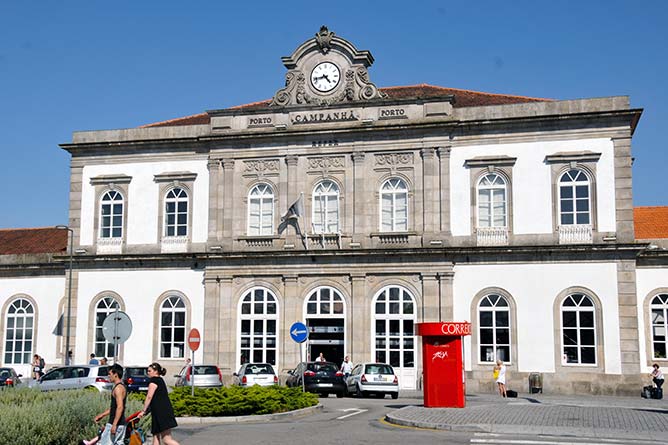 Campanhã is a great neighborhood in Porto to visit when you want to avoid downtown craziness. It has a train station older than São Bento called Porto-Campanhã, which opened in 1877.

This train station in Porto has metro, buses, and taxis’ access. Even though the station is further from downtown and from the airport, it covers all train lines in Porto.

You should also keep in mind that there are more trains departing from Campanhã train station than from São Bento. 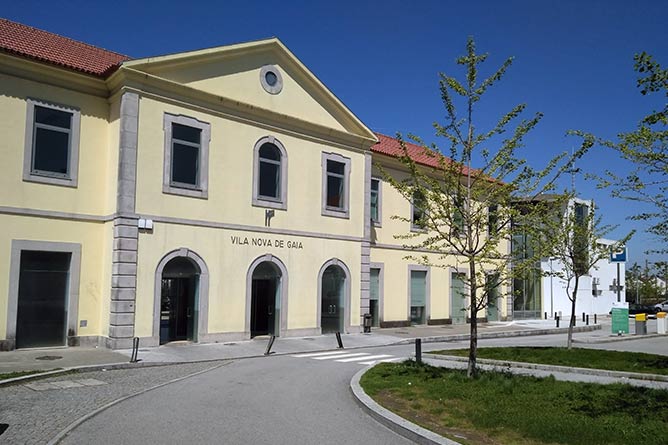 This is the oldest station in our list. It opened for operations in 1863.

Vila Nova de Gaia-Devesas is perfect for those who are staying in Gaia and want to go to Lisbon since it serves the North line which is not available in São Bento station.

Train stations in Porto: What are the main lines?

There are seven main lines running in Porto’s train stations. Let’s find out what they are.

Under three hours, this line goes to Viana do Castelo where the famous Neopop Festival happens. And it also goes all the way to Vigo, Spain for a total trip of about six hours. You might have to change the train at some point during the trip though.

Stops worth visiting: Barcelos and Viana do Castelo.

The line is available in: Porto-Campanhã.

In under one hour and a half, you will fall in love with the stunning city of Braga.

In less than two hours on this line, you’ll get to discover Guimarães, the first capital of Portugal.

Stops worth visiting: Vizela and Guimarães.

On this line, you can reach Caíde in one hour, then you take another train to Marco de Canaveses, a stunning city and the birthplace of a famous singer Carmen Miranda who has a star in Hollywood’s walk of fame.

This line reaches Espinho in one hour and 20 minutes and it stops at the Aveiro, the Venice of Portugal.

The line is available in: Porto-Campanhã and Vila Nova de Gaia-Devesas.

This line takes you from Porto to Aveiro, Coimbra and all the way to Lisbon. You can get off at Coimbra and take another train (Sud Expresso) to Hendaye, France or Madrid, Spain.

The line is available in: Porto-Campanhã and Vila Nova de Gaia-Devesas.

What is the difference between trains?

When booking your ticket, you’ll notice trains with different names. Which one should you take? We’ll answer that here. 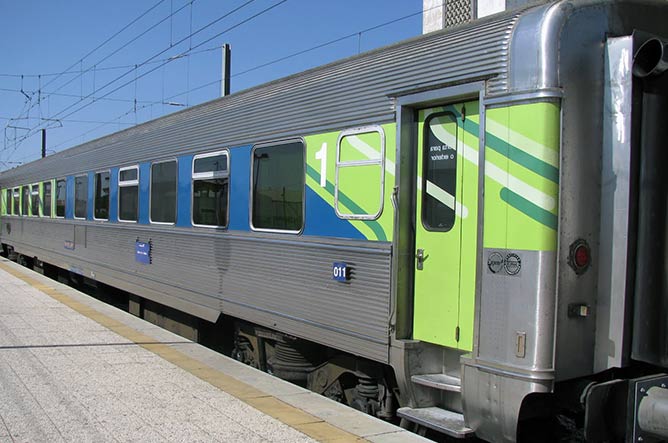 Intercidades are long-distance trains that connect some of Portugal’s main cities (Lisbon, Porto, Braga and Guimarães). Onboard, you have a buffet bar and free Wi-Fi. You can see the prices here.

The Intercidades train allows passengers to bring their bikes (one bicycle per person). The support for bicycles is on the 2nd class carriages. Each carriage allows 2 bikes. 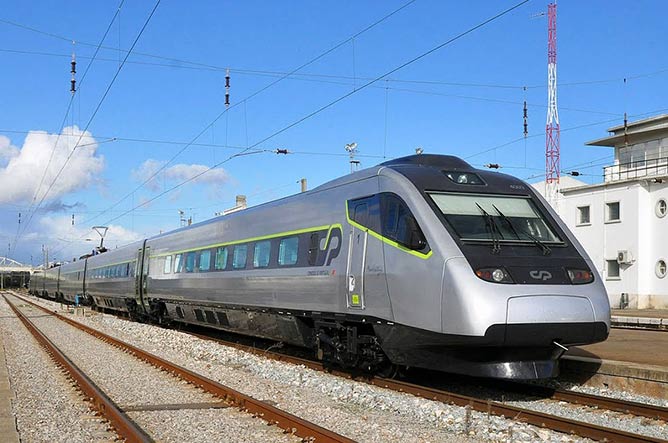 The Alfa Pendular train operates between major cities like Braga, Lisbon, and Guimarães. You can see the prices here.

It has a cafeteria, a mini bar, meals, free Wi-Fi, audio and video channels and bathrooms. If you booked the Conforto class (which is like a 1st class), you get a complimentary drink, a newspaper or a magazine and earplugs. You also get access to power sockets that are available in some seats only.

With this first-class ticket, you have access to the CP Lounge at Lisbon Oriente station (an air-conditioned space with TV, Wi-Fi, newspaper and drinks).

The tickets to these trains are more expensive and one of the reasons is that they’re supposed to be faster. But to be honest, the Alfa train is always late, defeating the purpose of paying more for the speed. Not to mention, this is a very shaky train, so if you suffer from motion sickness, maybe buy a ticket for another train.

Also, if you’re traveling with a bicycle, it has to be disassembled and carried like luggage. 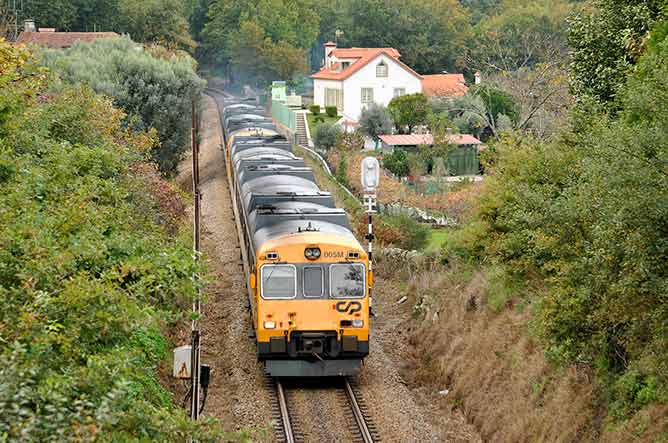 If you’re traveling all over Portugal, you will most likely take the Regional or InterRegional train. Those trains allow connections at the main stations in Lisbon, Porto and Coimbra. They are meant to be long distance trains, but they have many stops connecting small villages. See full ticket prices here. 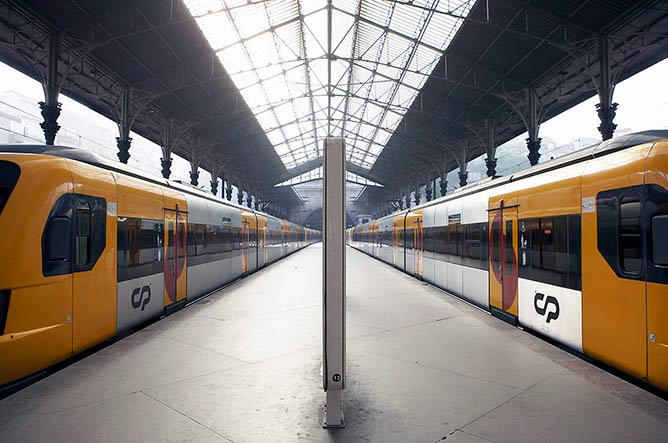 The urban trains are the ones that take you to major places within the district of Porto like Aveiro, Braga, Marco de Canaveses and Guimarães. They’re normally more frequent. You can check the prices here.

The Urban trains allow you to bring your bicycle for free as long as it’s one bicycle per person.

But always be careful, if you have to take the Urban train in São Bento train station, you might have to change it in Campanhã train station in Porto if you’re going to other regions that are not in the district of Porto. 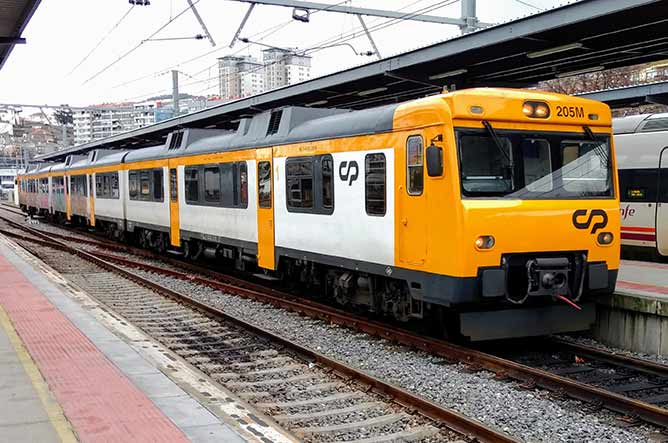 As the name indicated, international trains are the ones that allow you to travel internationally. And Porto train stations has one that goes you all the way to Vigo, Spain. See prices here.

How and where can I buy tickets?

You can buy a ticket online through Comboios de Portugal website or on their phone application. You need to sign up for an account. They ask for your name, date of birth, desired routes and you can choose to put your phone number to receive tickets via text message.

If you have family members, there is no need to create an account for each one. You can simply add them under your profile. Payment methods accepted are Paypal, Credit Cards and Debit Cards. For identification, they accept almost all forms including a passport or a driving license. 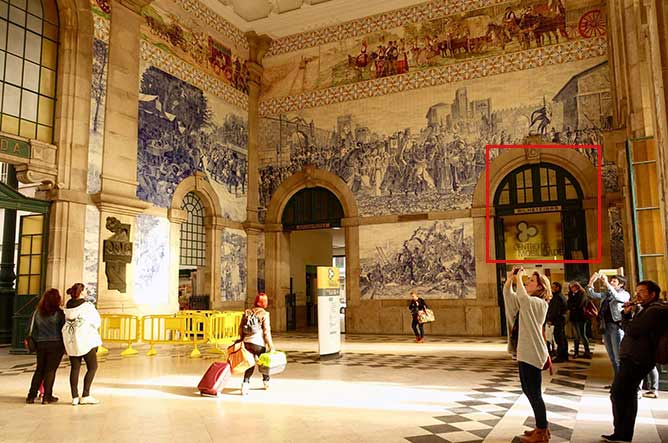 © You Should Go Here

This center allows you to buy other transportation tickets like the metro and bus. The staff will also be available to help you with any questions you might have regarding transportation. 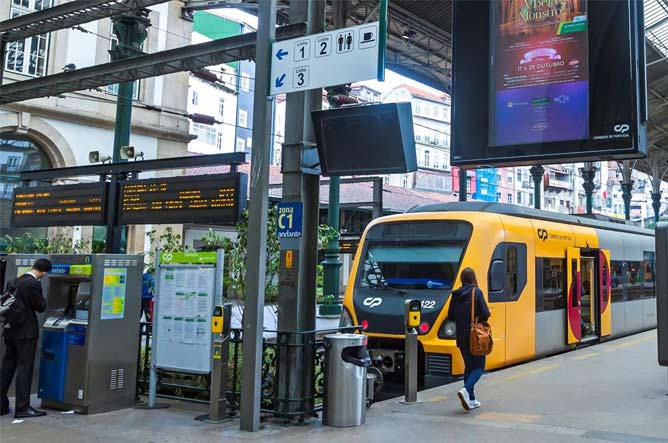 You can find train ticket vending machines in all train stations in Porto. They have the green symbol for Comboios de Portugal “the name of Portugal’s train system” and you can pay using cash, coins or a debit card. 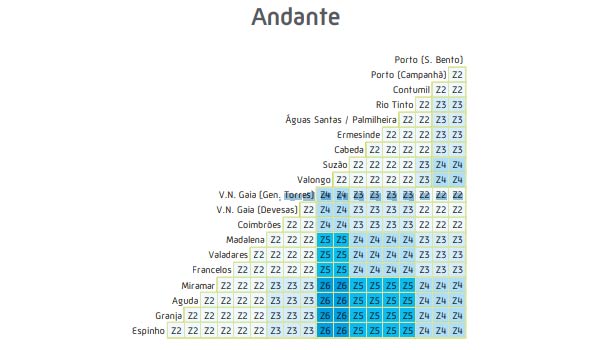 If you’re traveling anywhere between Campanhã and Espinho, you can charge your Andante card where you normally would when riding the metro or bus in Porto. 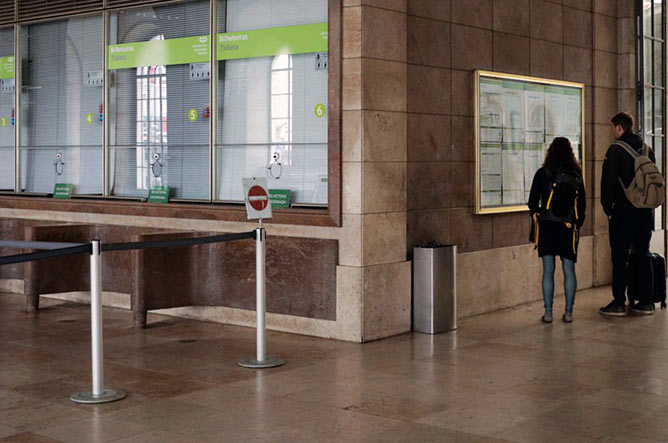 These are also available in all train stations in Porto and you’ll recognize them from their green banner. The staff will help you buy tickets. And they will also answer any of your questions. However, you can only buy tickets to ride the train system in Porto so you can’t buy bus or metro tickets here.

Any other tips for the train stations in Porto?

Pay attention to what train you choose

This allows you to go directly to your destination saving you a lot of time and hassle.

There are discounts when you buy tickets days ahead of time. And there are also discounts for families and special occasions (see here). Just keep in mind that discounted tickets can’t be refunded.

Buy your tickets online to avoid buying them last minutes like everyone else. We also recommend you book your ticket ahead of time, especially if you’re traveling during national holidays like Christmas or Easter. Buying your tickets earlier will also ensure that you can choose the seats you desire. 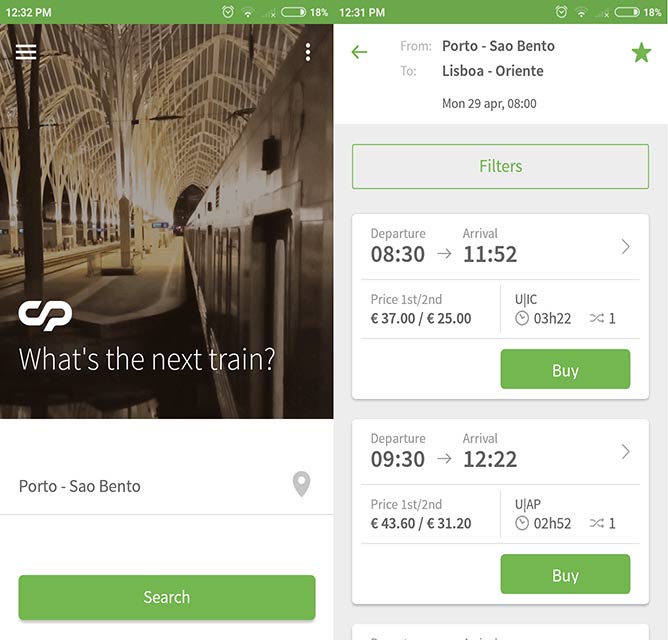 Even though the app is not the greatest, it’s still useful. You can see train schedules and prices without having to login in. But if you do log in, you have access to your tickets and your timetable. And that way you don’t need to worry about printing or carrying papers (yay for saving trees!). The app is available on Andriod and iOS.

Seniors above 65 years old and kids between 4 and 12 years old get 50% off. If you’re traveling with kids younger than four years old, they ride for free if they don’t take up a seat.

When traveling on trains in Porto, don’t forget to choose the right platform. This information is usually written on screens on the main train stations in Porto. 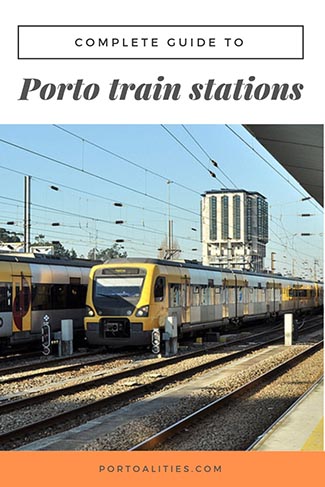 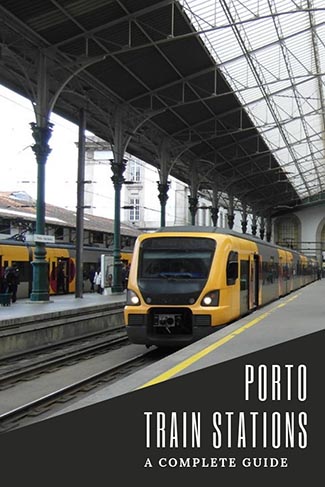