Who was Duque da Ribeira?

Discover the fascinating story of the Duke of Ribeira, one of the most important characters in the history of Porto.

While I was investigating the reason why people jump from D Luis bridge, I came across this mysterious character called the Duke of Ribeira. Not that I personally met him, as he died in 1995; but he would constantly, unexpectedly, appear in the middle of all conversations.

It all started at my parents’ home. I was talking about Ribeira and they suddenly asked: do you know who the Duke of Ribeira was? Shamefully I didn’t, and they told me that he was widely known for rescuing bodies from the Douro river. But did he rescue people alive as well or only cadavers? Was this his job, his voluntary work, his vocation? I was already intrigued.

Deoclediano Monteiro, known as the Duke of Ribeira, was a longshoreman, a boatman and an actor, but it was on the Douro river that he felt “truly alive”. When he was just 11 years old he saved someone from drowning in the river, and since then he didn’t stop. But what brought him fame was his ability to rescue bodies from suicidal attempts from D. Luis bridge. His knowledge about the river currents was so wide that when told the exact point where a person had hit the water, he would be able to determine were the body would most likely be.

“Duque da Ribeira would rescue bodies from the river depths, in a process called gratear. But you should talk to Gastão, he can tell you more about him”, told me Olinda Rabelo.

And so I did. Gastão is this blunt character dearly known in Ribeira, as he also rescues bodies from the river. But, make no mistakes!, “the Duke was the Duke and I am myself. I only rescue bodies at the surface, whereas the Duke of Ribeira was dedicated to rescuing bodies that would be stuck at the bottom of the river.” He stops for a moment, staring at the river. “It was impressive. As soon as he was told that there was a body in the river, he wouldn’t rest, looking day and night for it. And as soon as he found it and took it to the river banks, he would kiss the body on the front”. Families would come from far away, as they still do with Gastão, to thank him for bringing their dearest ones back home.

Duque would also spend his time teaching small kids from Ribeira how to swim, using cork floats around their chests to prevent them from drowning in the river.

“The Duke of Ribeira? Of course I knew him! His father and mine were close friends, as he was our neighbour back then, in São João Novo street” tells me Matilde, a friend of mine on a casual dinner. So, what would be better than paying a visit to a typical neighbourhood with an old friend? So we went there on a sunny afternoon.

São João Novo is this ancient neighbourhood, close to the medieval walls of town, that holds a breathtaking overview to Douro river. It is also where the Duke used to live with his wife. Or wives… apparently no one in the neighborhood is able to determine if he was married two or three times, as I concluded watching a heated between-neighbors-conversation in the middle of the street.

What is clear is that the Duke of Ribeira leaves no one indifferent, even after years upon his death. Be it memories from his swimming classes, courageous rescues or simply from his daily presence, everyone from typical river neighborhoods knows and cherishes him. As a result you can find their tribute to the Duke on an iron bust in Ribeira. Underneath it says: To Duque da Ribeira, Símbolo e Sentido, Testemunha e Protagonista da Ribeira. A homenagem da cidade – Symbol and Meaning, Witness and Protagonist of Ribeira. The tribute of the city. 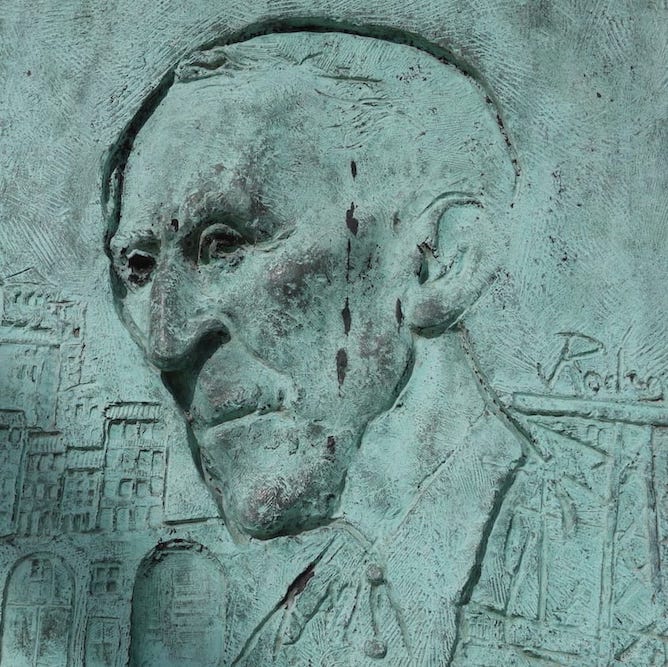