Why have coffee at Cafe Majestic in Porto?

Discover the story of the famous Cafe Majestic in Porto, as well as inside tips to a secret cafe that belongs to the same owners.

In Porto, coffee is the time of day when the clock stops and one has a much needed break, always sitting in the company of friends or coworkers. The coffee culture is so strong in Porto that if you want to invite someone out you always say “let’s go for a coffee”, regardless if you drink coffee or not!
And what better place to have coffee than at the historical cafe Majestic in Porto? 🙂

The story of the Cafe Majestic in Porto

The famous Cafe Majestic in Porto opened in 1921 with the name Café Elite, which functioned as a private club, much to the dismay of the population of our city.
In 1923, Cafe Elite gave place to Cafe Majestic, whose name and decor were inspired by the French Belle Époque. We cannot forget the historical context: it was the crazy 20s, right after the WWI, at a time when no one could preview that another war was going to take place.
People were enjoying a period of peace, more prosperity and an increase in women’s rights. And you can pretty much feel this joyful atmosphere in the decor of the Cafe Majestic in Porto. 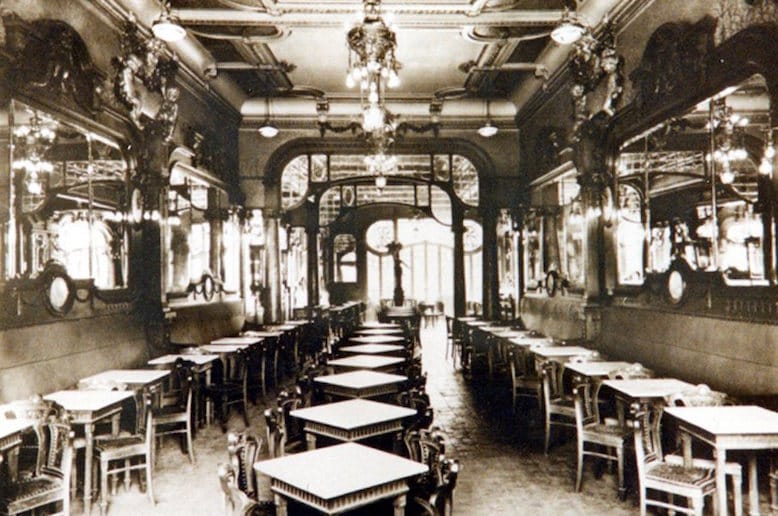 During the 20’s and the 30’s, political and literary discussions took place at the Cafe Majestic.
During World War II, the Cafe majestic rapidly decayed due to the “war tax”. As a consequence, most of its original furniture, such as the lamps and the beautiful pool table, were sold; and most of its staff was fired as well.
It took several decades until someone willing to rescue the golden splendour of Cafe Majestic in Porto appeared. His name was Agostinho Barrias, a self made man with an old passion for historical cafes.
After working a decade in Brazil, Agostinho came back to Portugal and in 1983 decided to invest in Cafe Majestic in Porto, even though he is not originally from the city.
The renovation of the Cafe Majestic took many years, as the owner wanted to restore it according to its original trace. “I invested because I liked Cafe Majestic, not knowing if it was going to be profitable or not,” he told me. 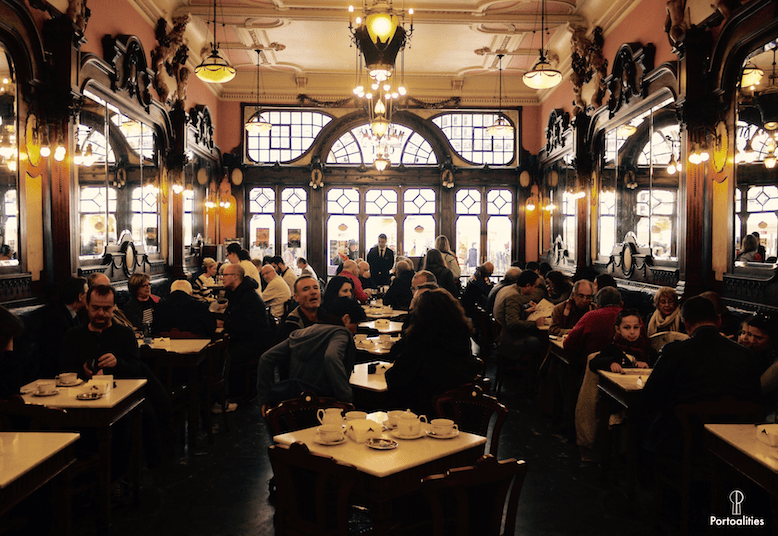 Since Cafe Majestic in Porto was quite dilapidated due to the World War II, Agostinho and one of his sons, Fernando, dedicated themselves to look for old pictures of the cafe, to enable them to recreate it according to its original style. Finally, they found an old image and the restoration work started, including making accurate replicas of the original lamps. 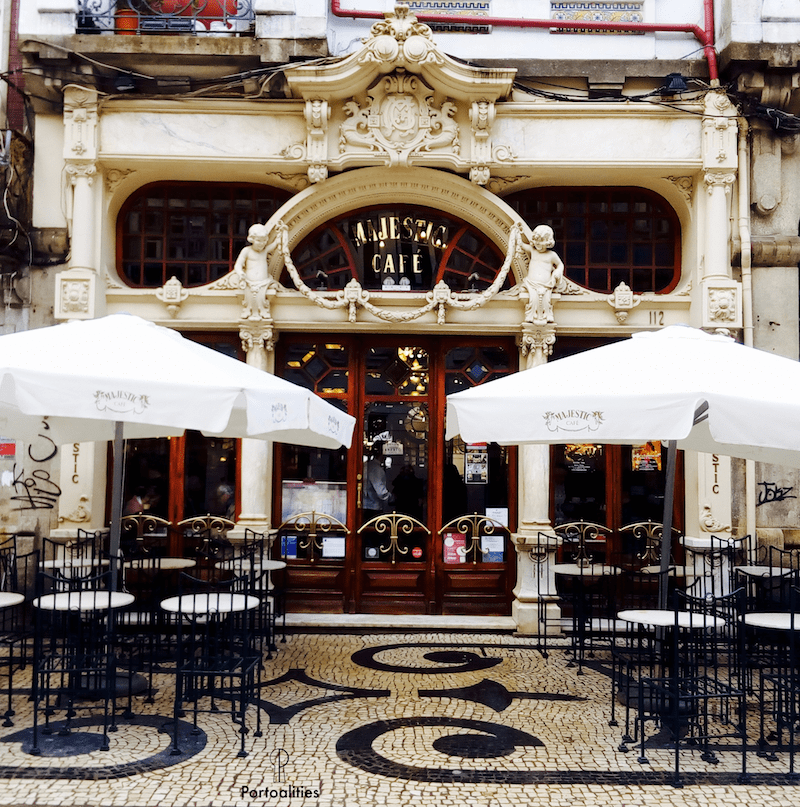 The Cafe Majestic, after 8 long years, regained its rightful place as the most elegant cafe in Porto. Over the years, in addition to thousands of tourists who seek it every year, it had distinguished visits such as Romy Schneider, Fafá de Belém and Juscelino Kubitschek, a former president of Brazil.
But to be completely honest, even though having a coffee at the Cafe Majestic is considered one of the best things to do in Porto, I don’t really recommend it. It’s highly touristic – there is always a huge line in front, it’s always packed and noisy and worst of all, the prices are FOUR times higher than in any other cafe in town.

But I have the perfect solution for you: instead of going to Cafe Majestic, why don’t you pay a visit to Café Guarany?
It’s also an historical cafe, it’s also incredibly elegant and what no one knows is that… it belongs to the same owner of Cafe Majestic in Porto, so the menu is exactly the same but you pay a third of the price! 😉

The story of Café Guarany in Porto

The most attentive will notice the similarities between Cafe Majestic and Cafe Guarany: the same delicious coffee, the famous French toast with egg custard, the friendly service, the style of both cafes … in fact, the two cafes belong to the family Barrias! 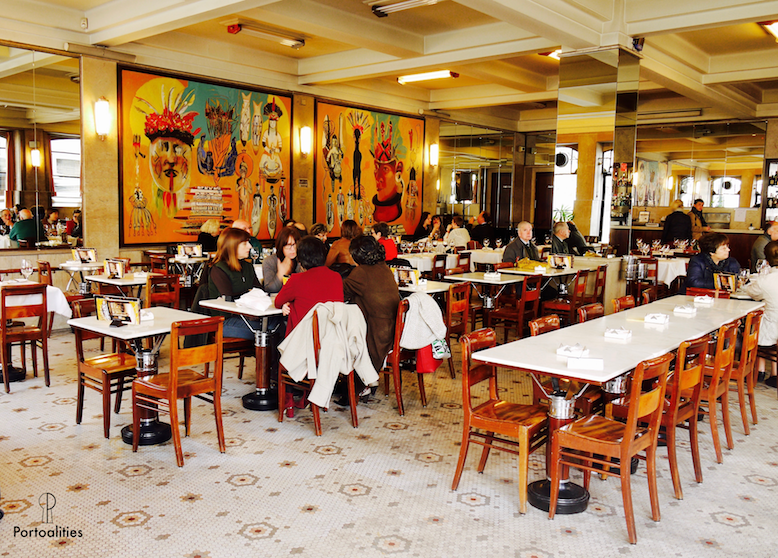 However, the two cafes are completely different in architectural styles, given its distinct historical contexts.
Cafe Guarany was founded in 1933 and its privileged location on Avenida dos Aliados (translates to Allies’ Avenue and it was “the entrance hall of Porto”) was not innocent.
At that time, the Avenue was filled with businessmen and liberal professionals, and so Cafe Guarany became a business room “overlooking Allies’ Avenue”.
Furthermore, Cafe Guarany had a beautiful resident orchestra which animated the matinees of its faithful customers.

And the name Guarany hides a beautiful tribute to Brazil.
In the seventeenth century, Guarany Indians were the largest indigenous population in Brazil, a peaceful tribe that inspired the famous Brazilian writer José de Alencar to write the novel “The Guarani” about the relationship between a noble lady from Porto called Cecilia, and the Indian Pery, chief of a Guarany tribe. This novel later inspired an opera, “Il Guarany,” which premiered at the famous Teatro Alla Scala in Milan, Italy.
This beautiful story inspired the owners of Cafe Guarany, “the indigenous scent of the Amazon at the heart of Porto”, as a tribute to the beautiful relationship between Porto and Brazil.
That is why there are two magnificent canvases of the painter Graça de Morais at Cafe Guarany, called “The Lords of the Amazon”, which depict the daily life of the Guarany tribe.
There is also a sculpture in marble by Henrique Moreira, called “The Guarany” – a huge Indian, majestic in his silence, ensuring the safety of those who are at Cafe Guarany! 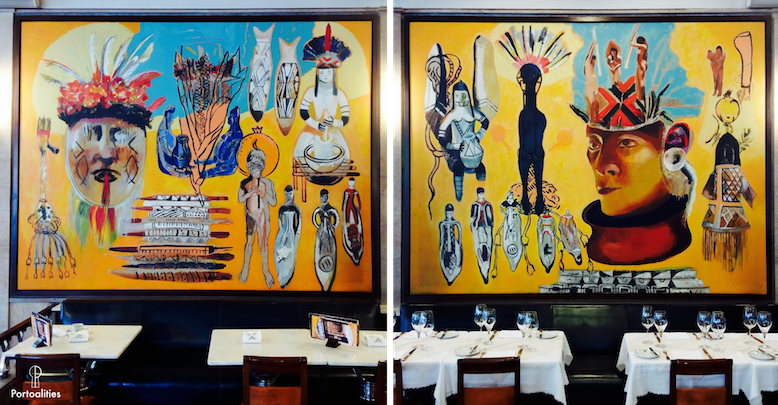 I go quite often to Cafe Guarany to peacefully drink my coffee whilst I am writing or reading.
Even though I appreciate both cafes for its historical dimension, I prefer Cafe Guarany, in its quiet mornings overlooking the Allies’ Avenue. Thursdays and Saturdays it has fado evenings – I strongly advise you to make reservations!
Cafe Majestic, Cafe Guarany … two historical cafes of Porto, two joyful witnesses of our evolution as a city.
Thank you, Mr. Agostinho, Mr. Fernando and Barrias family, for the affection and devotion that rescued these cafes from the clutches of modernity! 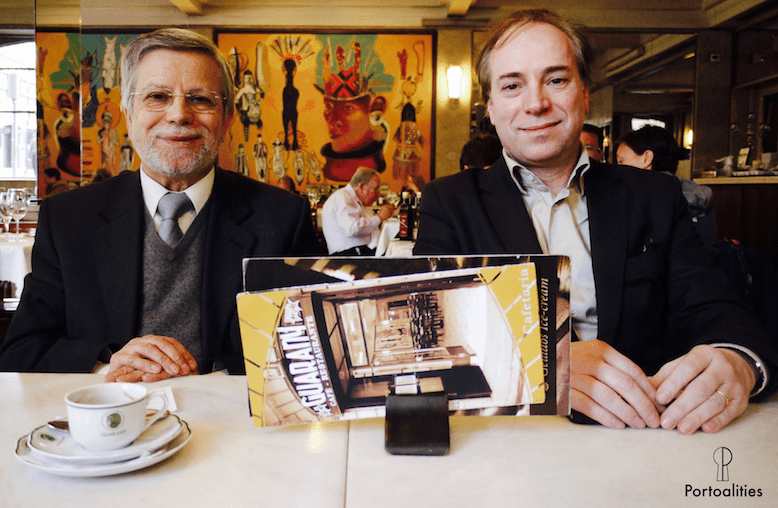 No solo travelers
Book Tour
You might also like
Food & Wine
Wine tasting in Porto: where, when and how

Discover all about wine tasting in Porto - general rules for wine tastings, the best Port houses and wine bars and wine recommendations.

Get away from tourist traps and discover the best traditional restaurants in Porto, the right places to try the amazing Portuguese food.

For all my coffee lovers' readers out there: yes, there are fantastic specialty coffee shops in Porto! Come and discover them :)