5 things that Porto and London have in common

Learn what Porto, in Portugal and London have in common: from the Harry Potter fever to Jewish myths and tales, there's plenty to discover!

When me and Clarissa, the amazing blogger at Dondeando Por Aí met, it was love at first sight. We realised that we had to write together – and Brexit, or the-end-of-the-European-Union-as-we-knew-it, was the right excuse to do so.
We decided to turn Brexit into something positive, looking for links between the cities where we live – Porto and London -, therefore making our modest contribution to link two cultures that politics wants to separate. We hope you enjoy! 🙂

Since Harry Potter became a global phenomenon that all cities where J. K. Rowling, the author of the books, lived, try somehow to market this, and Porto and London are no exception.
In Porto, there are legends and tours built around this topic, and even our dear Lello bookstore sporadically organizes Harry Potter events, when kids dress up as Hogwarts students (it is actually quite fun to watch!).

This connection of Harry Potter to Lello Bookshop is not entirely misplaced; J. K. Rowling was a confessed admirer of this bookstore, which was a possible inspiration for the Library Flourish & Blotts, where Harry Potter bought his books, or to Ollivander shop, where Harry bought his magic wand (yes, I also read them all). And only those who have never visited the Lello Bookshop can doubt its influence in J. K. Rowling’s writing… the whole building breathes history and magic! 🙂
There is another story that may also be true: the uniform of Hogwarts students was inspired by the Portuguese academic uniform, which slightly varies from city to city, but is basically a black suit and a wide cover in the same color. 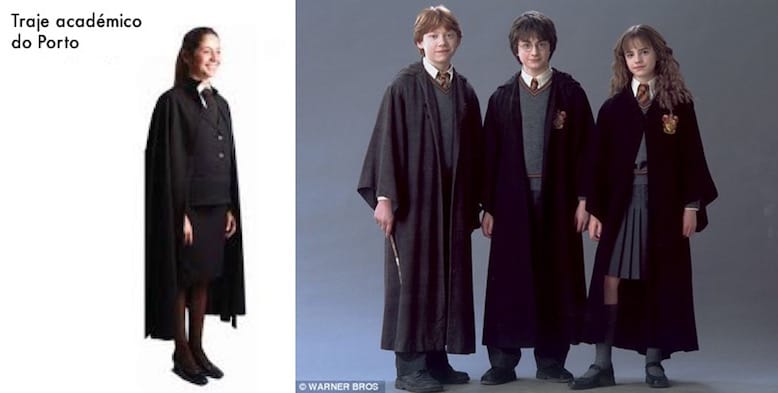 As for the myth that connects the magical black art magician Salazar Slytherin to the Portuguese dictator António Salazar… who can say at what point of maturation the book Harry Potter and the Philosopher’s Stone was when J. K. Rowling left Porto? J. K. hoped to get out of here with a written book, and instead took a daughter, some hurt feelings and many ideas. And in Porto, we only have a fuzzy memory of her, when we see the long queue for Lello bookshop, or groups of students here and there 🙂

2 – In Porto we have Port wine, in London they actually drink it!

Before writing about Port wine, let me be completely honest with you: in Porto we usually don’t drink Port wine! In fact, the British are the true connoisseurs of Port wine, and we owe them the development and worldwide fame of this wine that we all cherish so much.
Nonetheless, and contrary to popular belief, Port wine was not invented by British sailors that added cognac / brandy to Portuguese wine, so that it could endure the journey back home. Most likely, the wine was done in a rudimentary way similar to contemporary procedures, with the addition of brandy after a few days of grapes fermentation, the so-called “sweet wine” made by… Portuguese monks, to serve during the mess!

Over the fifteenth to eighteen centuries many Englishmen settled down in the Douro Valley, dedicating their lives to the production of Port wine, as evidenced by the names of the best Port wine cellars: Taylor’s, Kopke, Graham’s, Cockburn’s, Offley, Churchill’s … but we cannot neglect the important role of the Marquis of Pombal, the Portuguese statesman who ordered the demarcation of Douro Valley and the establishment of the “Companhia Geral da Agricultura das Vinhas do Alto Douro”, a Ministry that controlled the entire production process of this wine.

Thus, both Portuguese and English contributed to the creation of one of the best wines in the world 🙂

3 – We are crazy about football, too

No, I’m not going to badmouth the clubs of Lisbon :), as my goal is to focus only on the relationship that Porto has with its main football club: Futebol Clube do Porto (FCP).
This club, founded in 1893 (interestingly, by António de Almeida, a Port wine merchant who discovered football in his frequent trips to England), has about 120,000 members who strongly support their club in national and international competitions. FCP has, of course, an unconditional cheerleader association called “Super Dragons”, one of the largest and worldwide recognised associations (its leader, Fernando Madureira, led the Portuguese claque in football games during UEFA Euro 2016, which WE WON! 🙂

There is also a fun story to illustrate how Porto like its club: when FCP play against Benfica (the main team of Lisbon) and it wins, we go to Allies’ Avenue to celebrate; when FCP loses, we still go to Allies’ Avenue… to prevent Benfica’s fans to celebrate their victory there! 🙂
As Portugal won the UEFA Euro 2016, here’s a picture that shows how intensely Porto lived every game of the National Team in our beloved Allies’ Avenue! 🙂

4 – Porto and London have unsolved mysteries

In ancient cities like Porto and London, it is natural that numerous medieval mysteries remain unsolved, that historians strive to decipher. I am personally fascinated with Jewish history, as you might have noticed in my article about the beautiful Synagogue of Porto.
For over 250  years, the Portuguese Inquisition not only persecuted, tortured and killed hundreds of New Christians but also eliminated all the architectural and social traces of a broad fringe of society (Jews represent about 20% of Portuguese population in the fifteenth century). So it is a pleasant challenge to discover the Jewish remains and shows it on my private tours. And fortunately, I already had the pleasure to do so with Clarissa! 🙂 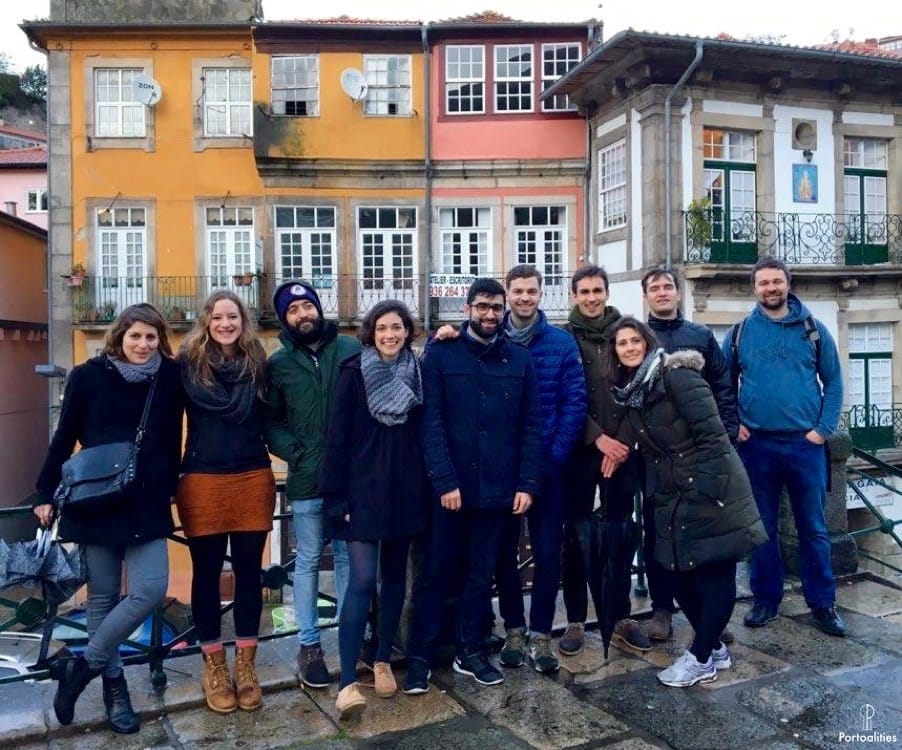 Our friendship was born in that moment, and it was also when Clarissa told me about a fabulous night tour in London about Jack the Ripper, which defends the thesis that Jack belonged to the Jewish community. You can read all about this tour on an article that Clarissa wrote, which I will not miss next time I head to London 🙂

5 – Both Porto and London are deeply connected to its ports

Porto, a city born from a “primitive village” called Calle, was, during the Roman conquest of the city, renamed as Portus Cale, a possible allusion to “the port of Calle”. This already shows the importance of the Douro river to the formation of Porto, and how, until the mid-eighteenth century, the city had its commercial lung around that river. This is how the city saw the birth of the Customs, the Stock Exchange Palace, the English Feitoria and several factories and warehouses along the waterfront.
However, the Douro river was always been a particularly difficult river to navigate – full of hidden rocks and tormented by floods, it was prone to numerous shipwrecks.

Between the reluctance of the city’s bourgeoisie and the voices that called for the construction of a new port in Leixões zone, a tragic accident took place, during the year of 1852: the famous boat “Porto” wrecked, taking with it the lives of 66 people against the rocks of Douro river (where is now the Castle of São João da Foz). It is said that this tragedy was the tipping point so that in Porto de Leixões, a safe harbour in Matosinhos, was inaugurated (1895).
In 2015 the new Cruise Terminal of Porto of Leixões opened, which is nominated for the international award ‘AZAwards’ Canadian contest that annually distinguishes the best projects of architectural design.