Everything about Porto’s cathedral

As Porto’s cathedral is one of the first buildings that come to mind when we think about the best things to do in Porto, I decided to write an entire article dedicated to it. I hope you like it and as usual, hit the comments’ section if you have any doubts 🙂

The history of Porto’s cathedral (brace yourself, I’m about to get nerdy)

It is impossible to dissociate Porto’s cathedral from the city’s history.
At the beginning of the 12th century, the diocese of Porto was linked to the diocese of Braga, a city further north.
The arrival of the powerful Bishop D. Hugo, coming from France, would change the situation. D. Teresa, the mother of the future first king of Portugal, D. Afonso Henriques, donated the county called “Portucalense” to its diocese as well as a large sum of money. Following this generous donation, D. Hugo started building a defensive wall as well as Porto’s cathedral, erected on the site of an ancient hermitage. It is not by chance that, a few years ago, several tombs from the 9th century were found under the front staircase of the cathedral.

The construction of the Porto’s cathedral continued under the patronage of D. Afonso Henriques. D. Afonso, at that time only king of the Portucalense county, knew that he has to please the Catholic Church in order to create the kingdom of Portugal (at that time, the Church was the only entity capable of granting the creation of new kingdoms). For this reason, he proceeded to finance several cathedrals and churches in Portugal, of which the most notable example is Porto’s cathedral.
Porto’s cathedral would undergo several interventions throughout the centuries, depending on the need for its renovation and the architectural styles in vogue, as well as the will of the bishops of the city.
In the 14th century, during the Gothic period, Porto was already an important commercial center given its strategic location nearby the Douro river. However, despite its imposing medieval city walls and the opulence of its churches, Porto could only truly rise to the prestige of other European cities when it acquired the relics of the saints that it possessed.
Fortunately in 1492 the relics of St Pantaleon arrived in the city (there are some obscure legends regarding this arrival that we will gladly share with you on a private tour), and were placed at Porto’s cathedral and this saint was acclaimed as the patron saint of the city.
However, the current patron saint of the city is neither Saint Pantaleon nor St John (contrary to what many people think) but rather … Our Holy Lady of Vandoma. Who would think that a woman would command the hosts here in Porto?!
You can see her statue inside Porto’s cathedral, on the left, right next to a beautiful silver altar (I’ll talk about it another time, it has some wonderful stories behind it!).

In the 18th century, the cathedral was profoundly altered, with the advent of Baroque architecture, by the hands of the Italian architect Nicolau Nasoni. This architect arrived in Porto in 1725 to paint some frescoes in the cathedral sacristy and ended up living in the city until his death, making a long lasting impact on the city’s aesthetics. He is also the artist behind the tiles that embellish the Gothic cloister of the cathedral of Porto as well as its lateral galilee, built in 1736.
During the 30s, the Sé neighborhood (around the cathedral) undergoes a dramatic change at the hands of the General Directorate of National Buildings and Monuments, tearing the churchyard that allows us to see Porto’s cathedral from far away but also destroying most of the buildings that were there on the first place.
Along the way they discovered some surprises, but these are stories and secrets that are left to tell during our private tours in Porto. 🙂 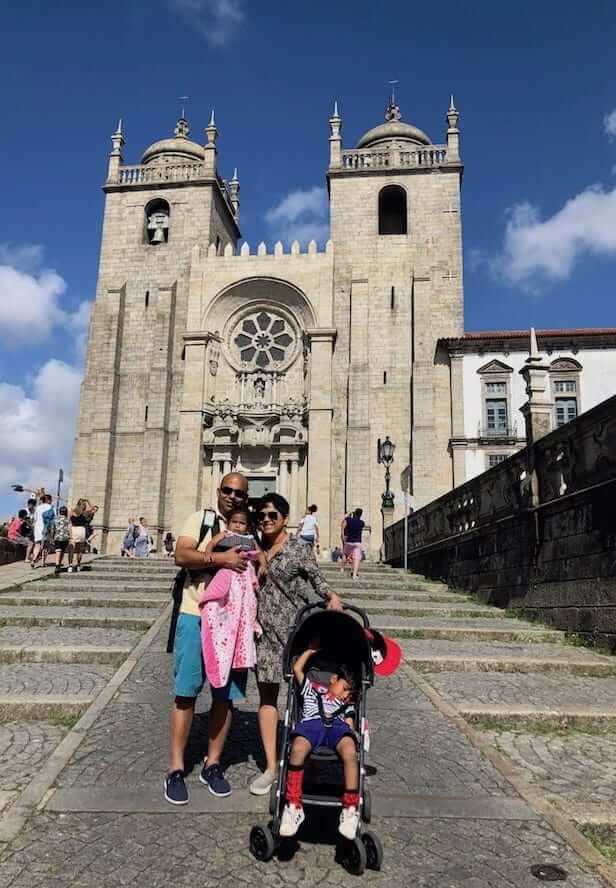 Porto’s cathedral combines several different architectural styles, most notably romanic style (XII century), gothic (XIV century) and baroque (XVIII century). It is quite extraordinary to think that what you are seeing when you look at this building is a blend that crossed different centuries and historical periods, isn’t it?

These are the most prominent features:

The cathedral of Porto is open for visits during the following schedule:

Currently the ticket to Porto’s cathedral costs 3€ and you can visit the church itself, the cloisters, the museum and the tower.

To attend the services it is free of charge, but obviously you cannot wonder around not take pictures while it lasts.

You can attend the services (aka mess) everyday at 11am, free of charge.

There is no particular dress code to visit Porto’s cathedral or to attend services there, but some common sense should be in place: you don’t want to show up in shorts and wearing flip flops to the most important religious monument in any city around the world, and Porto is no exception!

However, it is perfectly ok to show your shoulders, arms and legs with some modesty (keeping some modesty on the length of your shorts & skirts, ladies).

Attractions
What to during Winter in Porto

It's not the end of the world if it's raining during Winter in Porto. Discover what to do and see on a rainy day in Porto!