6 hidden places in Porto that you should visit now

I have already written about the top monuments in Porto. However, if you are an intrepid traveller eager to dig deep into the local culture, you might want to take a look at some hidden places in Porto.

Here’s my list for you, then let me know how you liked it!

Before reading this article: have you already decided where to stay? If not, read my article about the Best neighborhoods to stay in Porto! There I give you plenty of recommendations of great hotels and apartments in Porto.

And the top hidden places in Porto are…

We absentmindedly walk down Adolfo Casais Monteiro Street without imagining that, behind a large gate, is hidden one of the hidden places in Porto: the old Maria Amélia Velodrome.

The history of this velodrome dates back to the nineteenth century when, in 1861, King D. Pedro V acquired the respectable Palace of Carrancas to transform it into the official residence of the royal family during their visits to Porto.

In 1894, king D. Carlos I gives a land to the Association of the Velo Club of the Porto, precisely on the back of the old Palace of Carrancas, so that it could built a velodrome there. As usual at the time, the velodrome was awarded the name of the queen consort, Maria Amelia.

The Maria Amélia velodrome was Porto’s largest sports venue, with a 333.33 meter perimeter track and two tennis courts. The venue hosted many races and numerous sport events, such as the first motorbike race in Portugal.

With the implantation of the Republic, in 1910, the Maria Amélia velodrome closed, and the inclemency of time took over this fabulous (and now) hidden place in Porto.

The old velodrome is located behind the Soares dos Reis National Museum.

Hidden from inattentive glances, the Chapel of Senhor d’Além, built in 1877 close to the Serra do Pilar, is an open invitation for those who appreciate ruined monuments.

The original chapel was erected by the bishop Pedro Rabaldi in 1140, because a picture of the Crucified Lord was found during the construction of a convent dedicated to St. Nicholas.

This same image would sparkle another conflict between the city of Porto and the town of Gaia. The image was borrowed by Porto on a special festivity when of the prayers ad preltendam pluviam – pray for the fall of rains – were conducted in a fervent procession through the streets of the city.

As it rained on that day, the canons of the Cathedral of Porto collected the image and no longer returned it to its original abode, theChapel of Senhor d’Além.

If you go to this place, gently knock at the door: this beautiful chapel has a very special guardian who will gladly welcome you.

How to get there: walk from Jardim do Morro subway station.

Jewish gravestone at the Cemitery of Agramonte

It is widely know my appreciation for Jewish history; in such a way that I organise Jewish Heritage tours in Porto.

Curiously, my first contact with the Jewish heritage in the city took place at one of the most beautiful hidden places in Porto, many years ago.

At that time, I was distractedly walking at the Cemetery of Agramonte. There, among the regular Catholic tombs, I found a simple gravestone without any props other than the small stones usually placed on Jewish gravestones (a ritual based on the biblical tradition, when Jacob placed stones in the grave of his wife, Raquel).

You might find intriguing that I even bother to mention this story. But, in fact, you have to keep in mind that Jews were expelled from Portugal on the fifteenth century and that our Jewish Community in Porto is very small.

Therefore, to see a Jewish gravestone is indeed something unique – and a great excuse for you to visit one of the most beautiful cemetery of Porto.

How to get there: the subway station Casa da Música is a 5 minutes walking distance.

Join a private tour with us 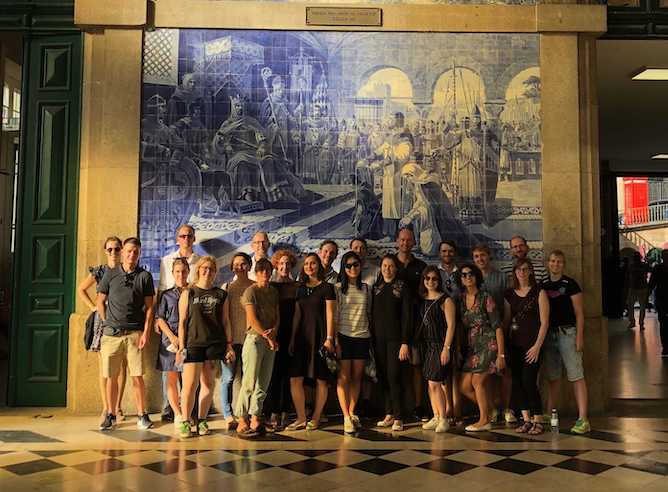 If you want to discover all the secret spots in Porto, why not join a private tour in the city with us? We most certainly know the best places in the city, even those the locals do not!

We will teach you about the history of the city and tell you secrets and stories that you never heard about. After being with us, you will know all the places outside the tourist areas, and discover another side of the city. What could be better than this?

You can read the reviews of our tours on our TripAdvisor and then simply send an email to sara@portoalities.com telling us when you are coming to Porto and how many people are travelling with you. It will be our pleasure to guide you!

Chambers of Torture of PIDE

Very close to my house, near the entrance of the cemetery of Prado do Repouso, is the Military Museum of Porto, which hides one of the most secretive hidden places in Porto.

After all, this late nineteenth century building housed the Delegation of PIDE-DGS (the state security service of the dictatorial Salazar’s regime) for decades.

According to M. Superville, a lawyer who personally spoke with the victims of PIDE: “The most common method of torture employed in Porto consists of obliging the exercise of the statue. The accused must stand until he answers all the questions. It goes on without any sleep time for several days and nights, with only short breaks to eat food. The lowest fainting is brutally suppressed.»

The most famous prisoners were Silva Marques, who escaped on a rainy night in 1962, and Hermínia da Palma Inácio, in 1969. Both are immortalised in statues placed next to the Military Museum of Porto, as silent guardians of a forgotten past.

How to get there: the subway station heroísmo is a 5 minutes walking distance.

(Tiny bits of) a Medieval Door of Porto

The ordinary Café Porta do Olival is the oldest coffee place in Porto, being opened since 1853 (much older than the famous Cafés Majestic and Guarany).

This small café, so close to our beloved Clérigos tower, hides one of the most interesting hidden places in Porto: a small arch from the Porta do Olival, simply one of the most important doors of the medieval walls of the city!

There is plenty of reason for excitement: after all, the medieval walls is one of the oldest structures in Porto (it was built between 1336 and 1376). Moreover, through this door in particular – Porta do Olival, that Philippa of Lancaster entered in Porto to get married to the king D. João I, becoming the queen consort of Portugal.

This marriage established the ancient alliance between Portugal and England. In addition to that, it originated an illustrious generation, of which the most famous member was Henry the Navigator.

This marriage was indeed so crucial that Jorge de Colaço immortalised it in a gigantic panel at the São Bento train station. Porto has many reasons to be proud indeed!

(Important note: These two pictures were taken from a local newspaper called Jornal de Notícias because, unfortunately, when I went to take pictures the cafe was closed for vacations. I’ll get there as soon as they open to publish my own pictures!).

How to get there: São Bento train station is a 5 minutes walking distance.

The Little Flag of Health

From the fifteenth to the seventeenth century, Porto had (at least) one simple and effective system of disease control: the bandeirinha, which translates to the little flag.

The flagship was hoisted in a granite turret right in front of the Palace of the Mermaids, each time a new boat was sighted to sail towards the stream. When the ship saw the flag, it had to stop in the middle of the river, awaiting the visit of a sanitary commission which purpose was to inspect the health of the passengers on board.

If there were sick people, they would go through a quarantine period in the old Santo António da Piedade Monastery, then transformed into “Lazareto”.

It is worth visiting what is one of the most interesting hidden places in Porto, not only for the flag itself but also – or mainly – for the non touristic view on the Douro river.

How to get there: take the tram #1 and leave at the station Alfândega. From there, climb the stairs you see on the hill. 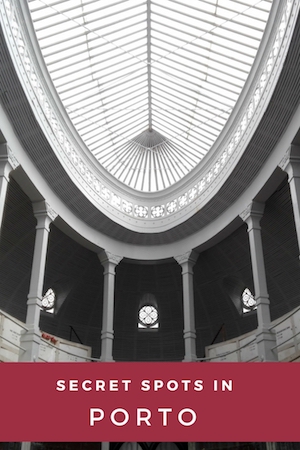