The most beautiful churches in Porto

There are dozens of beautiful churches in Porto, but seven stand out among the crowd. Learn which ones are worth visiting on this article!

Whether you’re a religious person or not, visiting the churches of Porto is an excellent way of getting to know not only the most important moments of Portuguese history, but also the evolution of architectural styles.
Therefore, I made this Top 7 most beautiful churches in Porto – I hope you like them all! 🙂

The most beautiful churches of Porto are:

Clérigos church and tower was, for many decades, the most famous monument in Porto. Its location, on an uneven street, lead the Italian architect Nicolau Nasoni to create a rather unusual church, with a single tower. This architectural eccentricity is the reason why Clérigos church and tower became so famous!
You can buy the online ticket to the Clérigos tower, and thus secure your spot to this incredible building from where you have a fabulous 360º view over the city. In my opinion it is the best view of Porto.
You should definitely take a look inside the church, as it is magnificent.
Best time to visit Clérigos church and tower: either at 11h (you can climb the tower and then watch a pipe organ concert inside the church at noon – it’s magnificent!) or at 18h (the sunset light is great to take panoramic pictures of Porto from the top of the tower).
How to get there: the Clérigos church and tower is a 10 minutes walking distance from the train & subway station São Bento. You can also take the trams 18 or 22.

What I truly admire in St Francis church in Porto is that it combines two architectural styles: Gothic (for instance, on the rose window on the main facade) and Baroque (for example, on the altarpiece).
During the eighteenth century the interior of the St Francis church in Porto was decorated with golden gilt wood work, making this not only one of the most beautiful churches in Porto but also one of the greatest examples of this type of Baroque decoration in Portugal.
Tickets: The ticket to visit the St Francis church in Porto costs 4,5€ and you can only buy it on the spot. You can book a guided tour by sending an email to museu@ordemsaofrancisco.pt and I HIGHLY recommend it.
How to get there: It’s extremely hard to park close by, so I recommend you to walk from the São Bento train station.

The cathedral is one of the oldest churches in Porto, dating from the twelfth century, and it harmoniously combines both Romanesque, Gothic and Baroque style. It is surrounded by narrow streets that go all the way to the Douro river, such as the famous Dark Street.
The cathedral of Porto is not only one of the best viewpoints of the city, but also a great starting point for your day, as it has a tourist center right in front of it.
Tickets: The entrance to the cathedral of Porto used to be free but these days you need to pay. Nowadays, you can buy a ticket to visit both the cathedral of Porto and the Episcopal Palace (where the bishop lives) for 5€. You can but the ticket on the spot.
How to get there: the cathedral of Porto is a 5 minutes walking distance from the São Bento train station.

Probably you already noticed that what drives me to monuments is not only its architectural value but the hidden stories behind them. Therefore, the church of Lapa is, in my opinion, one of the most beautiful churches in Porto because on its inside you can find the heart of the honourable King Pedro IV.
You may never heard of him but he was the man who fought, during the Portuguese civil war, against his own brother Miguel, in order to have a Constitutional monarchy.
Because of the civil war, Porto was surrounded by a siege for almost two years without ever surrendering – which is why, among other things, Pedro IV decided to donate his heart to the city. Tourists rarely visit this church but they should, as it holds an important part of our history 🙂
The cemetery next door is really worth visiting, since it has plenty of there are a lot of symbols of Freemasonry hidden in the graves.
Tickets: Free entrance to the church of Lapa.
How to get there: the church of Lapa is a 10 minutes walking distance from the subway station Lapa.

Chapel of the Souls 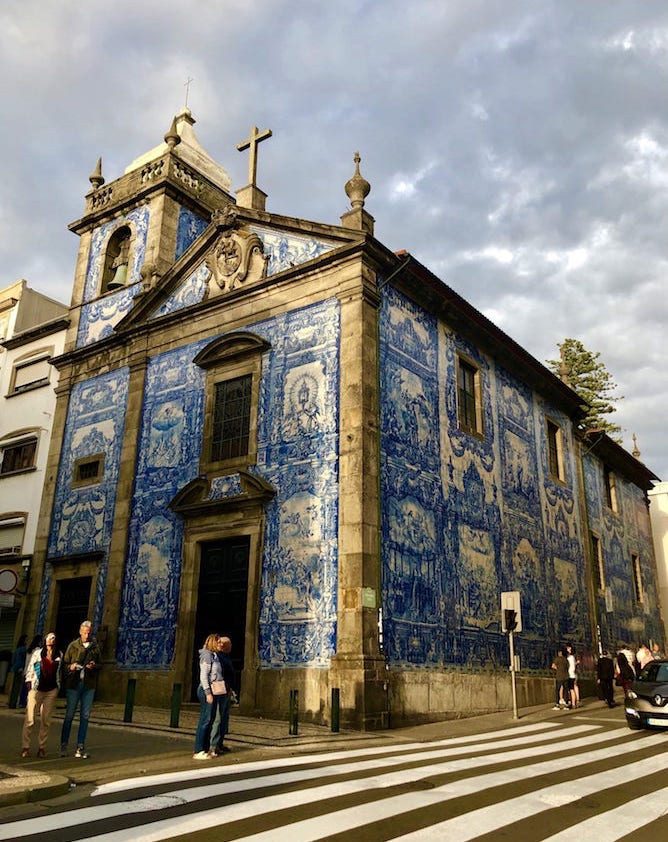 The Chapel of Santa Catarina, better known as the Capela of the Souls, is one of the most photographed churches in Porto due to its magnificent façade, covered with tiles.
In fact this church, that dates back to the end of the eighteenth century, only began to attract the attention of passers-by when, in 1929, its facades were covered by 15947 tiles that represent the steps in the life of St Francis and St Catherine of Alexandria, who are worshiped in the chapel.
The interior of the chapel is nothing worthy of mention, but it is worth going there just to see the magnificent façades of the Capela das Almas in Porto.
How to get there: the subway station Bolhão is right across the street.

Attractions
The best things to do in Summer in Porto

2 responses to “The most beautiful churches in Porto”