What are the rabelo boats?

One of the most popular symbols of Porto is the rabelo boat. On this article, I will tell you the history of the rabelo boats and let you know how to do a Douro river cruise in Porto (also known as the 6 Bridges cruise) inside a rabelo boat. Let’s go!

The history of the rabelo boats

The rabelo boars (the flat boats nowadays laying quietly by the riverside) used to be the nautical horses that carried barrels of Porto wine from the Douro valley vineyards to the Port Wine cellars in Vila Nova de Gaia. For centuries, when there were no suitable roads or a single railway alongside the vineyards, Rabelo boats were the most efficient and reliable mode of transportation, if not only for their exclusivity.
As boats navigating a particularly turbulent river (at the time no dams existed in Douro, so the river was very treacherous), they were hard to maneuver and thus required experienced sailors – about a dozen of them!, to ensure that the precious wine reached port safely. A long oar over the stern called espadela was used to manoeuvre the boat, by sailors standing up on a wooden structure called apégadas.  From there, it was easier to control the boat as well as to check the water currents and unexpected obstacles. 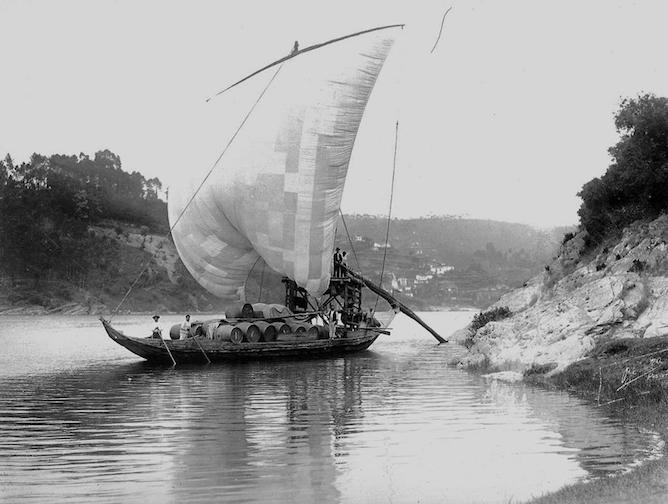 And… what about going all the way up the river, back to the vineyards, with empty barrels? That was another story: the boats were pulled by beasts of burden or human pullers using towpaths, caminhos de sirga, located on the river banks. And in order to prevent the boats from hitting the rocks, sailors would use long wood and iron cane shaped tools called bicheiros.
Nowadays Rabelo boats do not challenge the Douro river anymore; instead, they await anxiously in Vila Nova de Gaia for the only day in the year when they can happily navigate the waters yet once again: St John’s festivity, the most admired saint of Porto – even though he is not officially the patron saint, as I already explained 🙂

How to do a Douro river cruise in a rabelo boat

There are several ways to take a Douro river cruise in Porto, on a rabelo boat, also known as the 6 Bridges Cruise:

Whatever your choice is, I recommend you to book it in advance as it is one of the most popular activities in the city. Have fun! 🙂

Ready to pop the question? Then discover the best places to propose in Porto - lovely gardens, secret viewpoints, or during a boat ride!