Discover the buildings designed by Álvaro Siza Vieira in Porto. From the famous Tea House to Serralves museum, discover them all!

I decided to introduce you to my selection of the works famous arquitect Álvaro Siza Vieira in Porto, instead of making an exhaustive list of buildings.
Along the way, you’ll also step on two leading names of Portuguese poetry: António Nobre and Eugénio de Andrade, rightly honoured by Álvaro Siza. Indeed, visiting and photographing Siza Vieira’s monuments is one of the best things to do in Porto.

Who is Álvaro Siza Vieira? 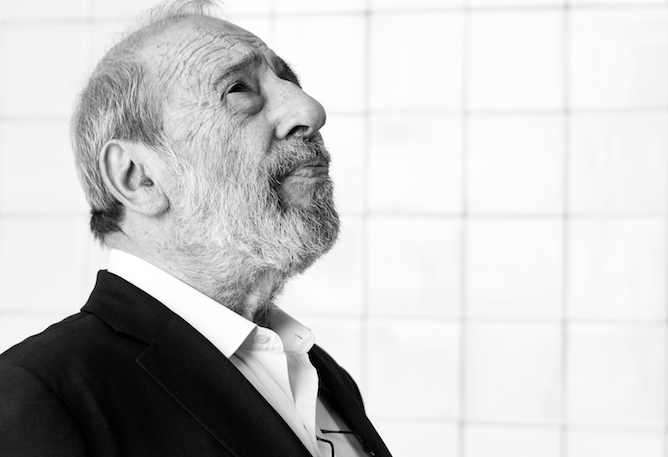 Álvaro Siza Vieira was born in 1933, in Matosinhos.
He joined the Faculty of Architecture of Porto in 1949, in an attempt to reconcile with her father; Álvaro wanted to be a sculptor at a time when engineering was one of the few reputable professions in Portugal.
Strongly influenced by the works of architects Adolf Loos, Frank Lloyd Wright and Alvar Aalto, Siza Vieira created his own language very early on his career, embedded in modern international architecture but also in Portuguese culture and traditions, resulting in his refined style of Portuguese modernism.

During the 80s, Álvaro Siza Vieira developed, both in Europe and in America, amazing buildings such as “Bonjour Tristesse” building (1980-84) in Berlin, the Iberê Foundation cultural center and auditorium Camargo (1998) in Porto Alegre.
But despite having his work scattered all over the world, the most famous buildings of Siza Vieira are located in Porto and around the city, such as Piscinas das Marés , the Boa Nova Tea House and the Serralves Museum of Contemporary Art. Keep scrolling down to find more about these buildings!

The buildings of Álvaro Siza Vieira in Porto

Perhaps the most famous work of Siza Vieira in Northern Portugal, the Tea House of Boa Nova in Leça da Palmeira, has the uniqueness of being built on the rocks of the Atlantic Ocean, therefore constantly challenging the maritime elements.
Back then the project was awarded to the famous Portuguese architect Fernando Távora, that attributed the project to one of his young assistants, precisely Álvaro Siza Vieira. It soon became the most famous building by Álvaro Siza Vieira in Porto.
Currently, it houses a haute cuisine restaurant by Chef Rui Paula that has been awarded with two Michelin stars.
How to get there: you can take the bus 507 as it stops very close to the Tea House of Boa Nova. Otherwise, take the subway to Mercado (blue line) and from there get a taxi / Uber. 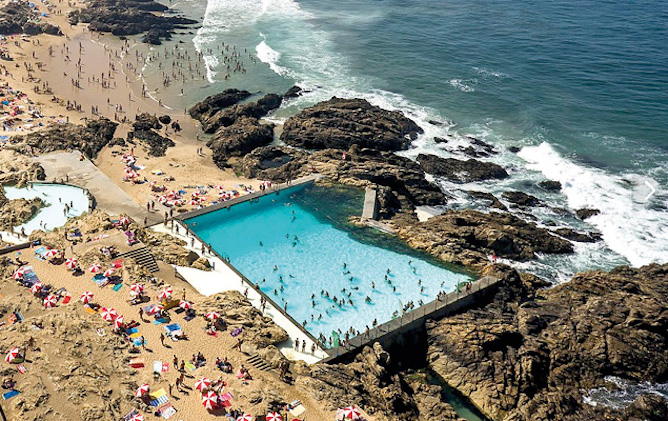 Nearby the Tea House of Boa Nova, these swimming pools are perfectly blended in its maritime habitat, offering a salty dip protected from the whims of the Atlantic ocean. It is built in such a way that the rocks are embedded into Piscina das Marés, as if they were part of it.
Piscina das Marés was built during the 60s and they are currently being rehabilitated – it is expected to reopen during Autumn 2020.
I don’t think it is worth to visit it before then, because with all the construction work going on you can barely see the swimming pool from the outside.
How to get there: you can take the bus 507 as it stops very close to Piscina das Marés. Otherwise, take the subway to the station Mercado (blue line) and from there get a taxi / Uber. 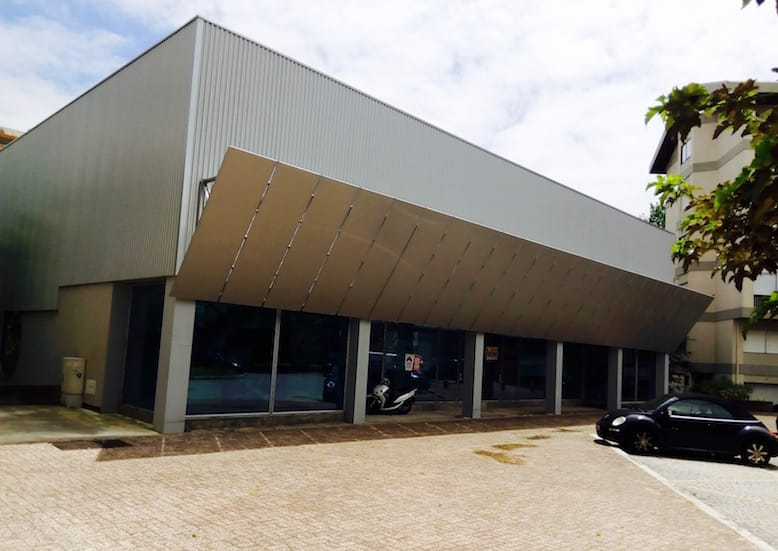 Hidden from curious eyes, this former grocery store (one of the first to ever open in Porto!), was recently renovated (for which future use?), is the living proof that masters are both celebrated and forgot everywhere.
How to get there: you can take the tram #1 and them walk to this abandoned building.

Bouça neighborhood (I am not sure this is the right translation but it is the best I can come up with!) is a multifamily residential architectural complex in Porto.
It is a large-sized complex, composed of multi-family buildings in a four-storey band, forming blocks that are opened to the nearby streets.
How to get there: the subway station Lapa is a 1 minute walking distance.

A simple monument honouring the great poet António Nobre, where you can read: “Fed up with the pain by which they were killing him / he went traveling the world”.  It is, due to its simplicity, one of the most ignored works of Siza Vieira in Porto.
It is practically in front of Casa de Chá da Boa Nova – just cross the street, very carefully.
How to get there: you can take the bus 507 as it stops very close to Piscina das Marés. Otherwise, take the subway to the station Mercado (blue line) and from there get a taxi / Uber.

1986: Faculty of Architecture of the University of Porto

The Faculty of Architecture of Porto has a great importance in the worldwide architectural scene, always scoring in the best international rankings and having “created” architects such as Eduardo Souto de Moura (Pritzker 2011), Fernando Távora and Álvaro Siza Vieira himself (Pritzker 1992).
Built between 1985 and 1996 by Álvaro Siza Vieira in Porto the set consists of 10 different volumes, each with its own peculiarities, but which find their identity through color, opacity and constructive solutions.
I include the Faculty of Architecture of Porto on this list of the best buildings of Álvaro Siza Vieira in Porto because it is worthy to praise the contribution of a citizen, on the right measure of his capabilities, to the city where he was born and where he grew both as a human being and as an architect.
How to get there: the subway station Casa da Música is a 10 minutes walking distance. 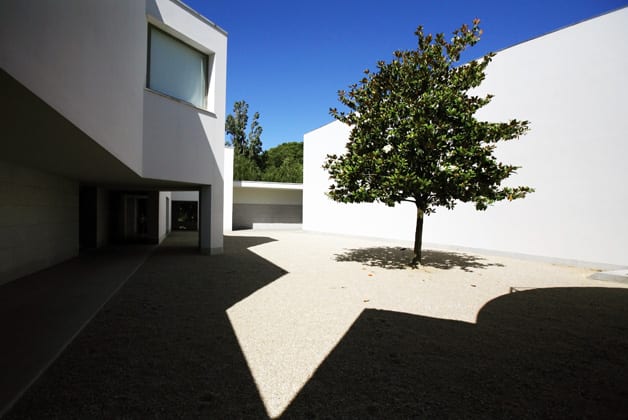 I especially like Serralves Contemporary Art Museum, one of the best museums in the city, because of its space, its silence and the multiple possibilities of living Art, offered by the architectural mastery of Álvaro Siza Vieira in Porto.
If you’re thinking about visiting the museum, you should consider buying the online ticket to Serralves. Once there, make sure to visit the beautiful park, designed by the landscape architect Jacques Gréber. The project, whose drawings date from 1932, is characterized by a modernized classicism, slightly Deco, influenced by the French gardens of the sixteenth and seventeenth centuries.
How to get there: take the subway to the station Casa da Música and from there, take any bus that goes down Avenida da Boavista.

São Bento subway station (not to be confused with São Bento TRAIN station!) seduces me because of Siza Vieira’s drawings on the wall – there is one, on the right side of those who descends the second escalators towards the subway line, which enchants me particularly, as it represents, in two or three lines, a beautiful bridge over Porto.
How to get there: it is a subway station 🙂

2006: Home and Atelier of Armanda Passos 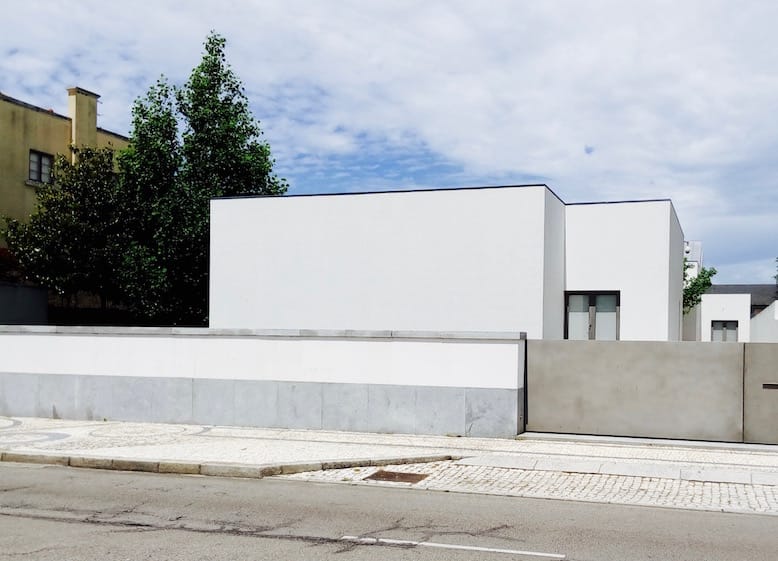 Armanda Passos is an important artist that was born in Douro Valley, in 1944. In 2006 Álvaro Siza Vieira designed her atelier in Porto.
A couple of readers already got in contact with me asking me how to visit this particular work of Álvaro Siza Vieira in Porto but as far I as know it is not open to visitors and they do not reply to emails or phone calls. A pity, truly!
How to get there: it is very close to Serralves contemporary art museum, so you can follow the same instructions to get there. You can also take the buses 203 or 207 as they stop across the street. 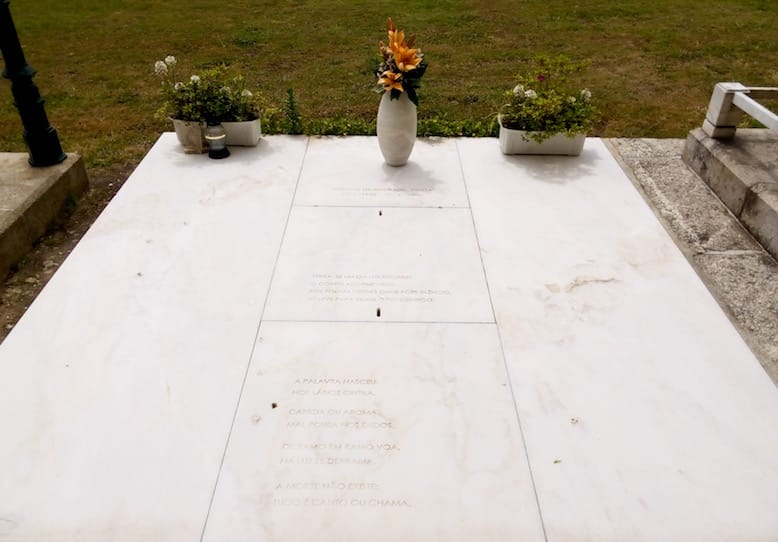 Eugénio de Andrade makes me company in so many occasions. A poet so great and yet humble could only rest in a snowy grave, absent of religious symbols or others but innocent and secret words. In Prado do Repouso’s cemetery, between silent breezes, you can read:“Earth: if one day you touch the sleeping body, puts green leaves where you put silence, be light on whom was for you.”
How to get there: the subway station Heroísmo is a 5 minutes walking distance.